Read more on Wikipedia
Read her bio on her website

Yayoi- now an octogenarian- continues to be passionate about dots ( &  red too!)

Yayoi Kusama Interview with BBC in 2012

A few things I learned about Yayoi from her BBC interview:

Her home & studio base:
– a psychiatric hospital in Japan

Why do polka dots pop up so often in her art…
“Please ask that to my hand. I’ve drawn lots of dots since I was a child and covered my fashion and my notebooks with dot. Dots are a symbol of the world – the cosmos – the earth is a dot, the moon, the sun, the stars – are all made up of dots. You and me – we are dots.” – YK

The ideas Yayoi explores through her art…
“These are my own work about my life: the deep emotion of being born human and the various movements of space as we know them. We can find out all sorts of things about these through dots.” – YK

Yayoi Kusama’s interactive Obliteration Room begins as an entirely white space, furnished as a monochrome living room, which people are then invited to ‘obliterate’ with multi-coloured stickers. Within a few weeks the room is transformed!
Yayoi Kusama was on show at Tate Modern from 9 February – 5 June 2012

Here is a classic Yayoi image of pumpkins… 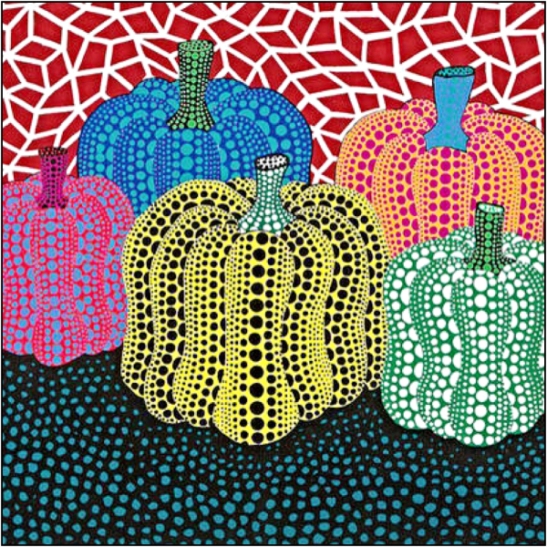 And a sculpture version of the yellow pumpkin dotted in black
which is now the icon of Naoshima island, Japan… 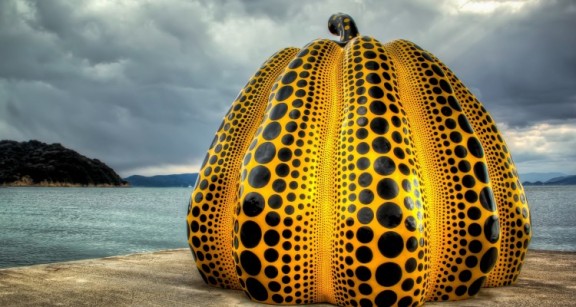 Yayoi Kusama’s Collaborations with other artists:

Peter Gabriel’s song ‘Lovetown’ was first released in February 1993 on the soundtrack to the film ‘Philadelphia’ and was included on the film’s soundtrack album. The video for the track was inspired by the art work of Yayoi Kusama, who Peter collaborated with on the video. The video was released as part of a compilation of Peter’s videos entitled ‘Play’ in 2004.

Peter Gabriel, in an interview with BBC, talked about the  passionate intensity of Yayoi’s art: “on the one hand- it’s childlike and on the other- very adult and disturbing…”

Marc Jacobs talks about how the idea of the collaboration developed…

The actual store display of the collection:

So do…as Yayoi did – don’t worry so much about what the world will say – seek help when you need it. And find a creative and peaceful way to express the wild inner landscapes of your mind.