Today and tomorrow we will focus on the dynamic creations of sculptor Janet Echelman.  We begin with her traveling art installation “1.26” which takes on a new meaning with every city it visits.

About the material —J. Echelman has shown the world through 1.26 and her numerous breathtaking living sculptures that an artist can create volumetric form without heavy solid materials.

About the Inspiration — J. Echelman was inspired by NASA data on the 2010 earthquake

About the Traveling Show —J. Echelman has shown “1.26”  in 4 continents; the installation interacts with local cityscapes wind and weather conditions ; artist also works on a different color palette for night lighting for each installation. Thus, 1.26 promises a unique experience for spectators in every city it visits. 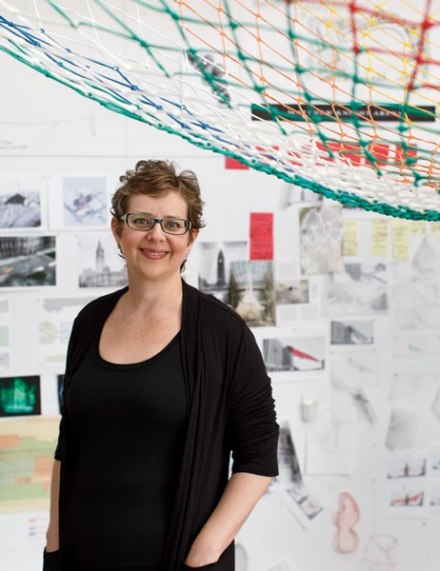 Janet Echelman at her studio
Image from Architectural Digest

A Little About Janet Echelman
Info from Wikipedia
“Janet Echelman is an American artist who builds living, breathing sculpture environments that respond to the forces of nature — wind, water and light — and become inviting focal points for civic life. Exploring the potential of unlikely materials, from fishing net to atomized water particles, Echelman combines ancient craft with cutting-edge technology to create her permanent sculpture at the scale of buildings. Experiential in nature, the result is sculpture that shifts from being an object you look at, to something you can get lost in.” Read more

“Janet Echelman created 1.26 just after the 2010 Chile earthquake when she learned of NASA data that measured the effects of the earthquake on the planet. The vibrations momentarily sped up the earth’s rotation, shortening the length of the day by 1.26 micro-seconds. This became the catalyst for the artwork, and her studio collaborated with a team of brilliant engineers, lighting designers, computer scientists, and architects to create the 1.26 series.

Materials: The sculpture is completely soft and constructed from highly technical fibers, making it lightweight enough to lace directly into existing structures without extra reinforcement. Its billowing surfaces are animated by the wind, contrasting with the rigid surfaces of surrounding city architecture. At night, colored lighting transforms the work into a floating, luminous form.

The sculpture takes on new meaning with each installation, as different cities bring new context to the 1.26 story. Developing a different color palette for each installation allows Echelman to express a desired mood and content specific to the location.” Read more

In North America
1.26 Sculpture Project at the Biennial of the Americas
July 6 – August 6, 2010
Illumination hours: 9pm-6am

In Australia
1.26 Sculpture Project at the Powerhouse Museum’s Love Lace Exhibition
in coordination with the City of Sydney’s Art and About Festival
September – October, 2011

Janet Echelman’s 1.26 in Amsterdam, 2012-13
Suspended over the Amstel River in front of the Amsterdam Stopera (the City Hall and Opera House) Amsterdam, Netherlands

In Asia
1.26 Sculpture at the Marina Bay
for the Biennial iLight Festival, 2014

Janet Echelman’s 1.26 in Singapore, 2014
Suspended on ‘The Float’ at Marina Bay, Singapore

Let’s learn more from JANET ECHELMAN: a phenomenal creative genius of our times

In an interview with Surface Design Journal Janet was asked:  “Do you have any advice for other artists as they strive to effectively communicate their creative vision?”

Janet Echelman’s response: “When I started making art, my biggest challenge was learning to hear my inner voice and finding a way to notice and pay attention to my own ideas.

I began writing and drawing with my non-dominant hand, which gave me access to my more fledgling, vulnerable ideas that were being overpowered by my more conscious, skilled hand. Once I began to pay attention to these new ideas, the biggest hurdle was to learn how to respect them – and the way to respect an idea is to invest the attention and work needed to develop it. This was difficult, but learning to do so was an important step in my growth as an artist.

When developing an idea, I remind myself not to start with compromise. I envision my ideal goal—what would result if I had no limits in resources, materials, or permission. I’ve learned that eliminating options too soon is costly because many ideas might be more viable than they initially appear. They just need a chance to mature and develop.

In early design phases, I try to disregard both inner and external critics, imagining my goal as a reality, and then working backwards to figure out all the steps I need to take to make it so. I use inspiration and look towards people who accomplished unimaginable ambitions to achieve bold change in the world.

If you start with yourself and make sure that you fully believe that what you’re doing will create positive change in the world, then you can go out and share your vision with genuine belief.

Being authentic is the most important thing when communicating about one’s art.” Read complete interview

So do…ponder on the words of Janet Echelman: “Being authentic is the most important thing when communicating about one’s art.”