Today we check out the upcoming performances of the Magic 3 (pianist KSENIIA VOKHMIANINA, cellist LINDA KOLLATI and violinist ANI UMEDYAN). Singapore and Malaysia, consider yourself lucky they’ll be performing in your neighbourhood. 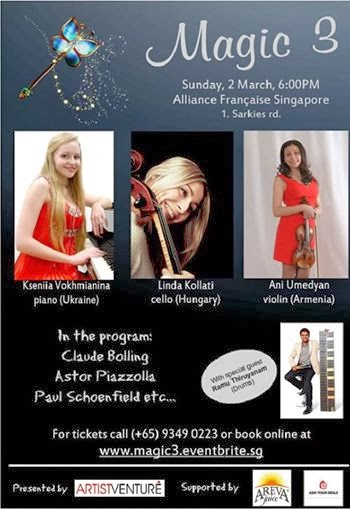 “Magic 3, is a highly interactive, engaging and entertaining music concert featuring artists from Armenia, Ukraine and Hungary.  The program features jazzy style music by French composer Claude Bolling, tempting tunes of Argentinean nuevo tango by Astor Piazzolla, Café Music by Paul Schoenfield and more…”(Excerpts from the Alliance Française newsletter)
Claude Bolling (born 1930)
“Unlike the scattered and novelty-ridden attempts to integrate the jazz and classical idioms, Mr. Bolling has seriously endeavoured to marry the two.” (THE WASHINGTON TIMES)via musicprom
*Read Claude Bolling’s Biography & Preview his music.
Astor Piazzolla (1921- 1992)
“In Piazzolla’s hands, tango was no longer strictly a dance music; his compositions borrowed from jazz and classical forms, creating a whole new harmonic and rhythmic vocabulary made for the concert hall more than the ballroom (which was dubbed “nuevo tango”).” via ITUNES
*Read Astor Piazzolla’s Biography & Preview his music.
Paul Schoenfield (born 1947)
“Schoenfield’s work rises from and returns to those fundamental wellsprings of song and dance, of lyricism and physical motion, and often of worshipful joy, that have always been the hallmarks of genuine musical creativity.” (Neil W. Levin)via milkenarchive
*Read Paul Schoenfield‘s Biography & Preview his music.
Featuring the Masterpieces of 3 Musical Geniuses
in One Program:
I must say that it’s very interesting to bring together in one concert the works of Claude Bolling, Astor Piazzolla and Schoenfield. All three are musical geniuses and revolutionaries. I would call them melodic weavers. Inspired by different musical genres, their oeuvres are full of turns, twists and excitement for both the musicians and the audience.
———————————
A Special Concert Dedicated
in Memory of the Victims
of the  Armenian Genocide
Armenian Church
April 2014
details to be confirmed
*FAQs on the Armenian Genocide
———————————
PIAZZOLLA!
Not Only Tango
May 17, 2014
A Benefit Concert
Marlborough College Malaysia
Kota Iskandar, Malaysia
-A spectacular show of music and dance featuring passionate tango melodies along with a live performance of Tango dancers.

This entry was posted on February 7, 2014 by Paulina Constancia in Create and tagged Creative Collaborations, music.