Save CEBU’s Trees 1: A Heritage Caravan & A Signature Campaign for Cebu’s Trees

Welcome to a new week here on DDoA! It has been tough deciding on this week’s topic. I wanted to write about earthquakes because of the 7.2 earthquake that hit my hometown of Cebu (Philippines) last Tuesday, October 15. However, my hometown is also in danger of another disaster, this time man-made & preventable.
From my sister’s recent post on Facebook I found out that she, together with some Psychology Volunteers on Bikes, joined the Heritage Caravan led by environmental law professor Golly Ramos to help raise awareness to save the decades-old (some over a century old) acacia trees that line the Naga-San Fernando-Carcar highway. Read more below:
“If you ride the highway from Naga-San Fernando-Carcar, you will definitely notice the large, majestic and decades-old acacia trees. Lately, a road widening project is in the works and these trees are in danger of being cut down because, “unfortunately” they are in the way. Local politicians, the Deparment of Public Works and Highways and the Department of Environment and Natural Resources are all in agreement that these trees need to be axed. Yesterday, Sunday, October 13, the Psychology Volunteers on Bikes joined a Heritage Caravan together with a busload of Law students from the University of Cebu led by Atty Liza Osorio and Atty Gloria Estenzo Ramos. The goal was to document the trees and to bring public awareness to fight for its preservation for a multitude of ecological and cultural reasons. Fight for the environment and counter development aggression. We save the trees, we save our future.” (Edna Lee, Facebook News Feed)
A Heritage Caravan
‘Help Save Cebu’s Trees!’
Some Cebu folks may be wondering how the word ‘Heritage’ relates to a campaign to save trees—A few weeks ago I did a post on Singapore’s Heritage Trees and this is what National Parks Singapore says, “Majestic mature trees are the natural heritage of a place. They serve as green landmarks of a city. They help us to identify with and stay rooted to the place we live in. These trees take decades to mature gracefully and beautify our landscape. As a city progresses, there is a danger of losing these mature trees. It is crucial for a city to have a conservation programme that safeguards Heritage Trees and promotes appreciation of its natural heritage.” Info from NParks Singapore
Learn more about the Heritage Trees and Heritage Roads of Singapore

Why a yellow ribbon?
The yellow ribbon is used for various symbolic purposes. It is often worn on one’s person or tied around a tree. Different countries have assigned different symbolisms and meanings to the yellow ribbon.  Read more on Wikipedia
In the Philippines, it relates to the song Tie a Yellow Ribbon Round the Ole Oak Tree  (Check out lyrics) which was best known for its use in the return of self-exiled politician Benigno Aquino, Jr. to the country in 1983, during which Aquino supporters tied yellow ribbons on trees in anticipation of his arrival. However, Aquino was assassinated upon arrival, sparking the rise of People Power three years later that led to the demise of Ferdinand Marcos‘ presidency and subsequent inauguration of Aquino’s widow Corazon Aquino as president. Yellow was also the campaign symbol of Aquino’s son who eventually became President Benigno Aquino III in 2010. Info Source
So I believe the Heritage Caravan chose to tie the trees with a yellow ribbon to remind the Cebuano public of the power of non-violent action (or active non-violence) as demonstrated by the Filipinos during the times of the late Corazon Aquino. Other names for non-violent action around the world: “people power,” “civil resistance,” “satyagraha“(1), “nonviolent resistance,” “direct action,” “pacifica militancia”(2), “positive action,” and more.

Majestic, Mature, Simply Amazing Trees of the South
Cebu’s Natural Heritage
(if only Cebuanos would treasure and guard them as they do
with their antique statues & articles)
A couple of weeks ago, I did a series called LiTREEture and included the “Trees” poem of Joyce Kilmer. After seeing this photo of Kilmer’s poem tied to one of the Cebu trees in danger of getting axed to make room for a road widening project, I thought I would make a poem inspired by Kilmer’s “Trees”, so here’s what I came up with:
I think Cebu shall never see
A highway lovely as can be
Head South and you too can attest
Your lungs and mind it’ll decongest
Canopies green and cool all day
Naga-San Fer-Carcar HOORAY!
In all times these Acacias care
Dust, floods, tremors- for us, they bear
In turn a sentence has been ordained
Ax the trees for wider lanes
But wait..
Try ride-sharing, road courtesy
Ax bad road habits; let’s save Cebu’s trees. 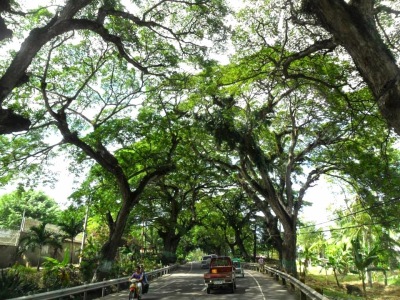 As I researched the internet on the latest developments on the Naga-Carcar Road Widening Project I chanced upon this article on Cebu’s Sunstar newspaper: “A CEBU-BASED tour guide “Ka Bino Guerrero has initiated an online signature campaign to help preserve the century-old trees that dot the highway from the cities of Naga to Carcar. The campaign was posted on Change.org website. Guerrero told Sun.Star that he organized the campaign to convince Department of Environment and Natural Resources (DENR) Secretary Ramon Paje and Department of Public Works and Highways (DPWH) Secretary Rogelio Singson to lift the order to cut the trees to make way for a road-widening project in the south of Cebu. Guerrero said the online campaign platform will notify Paje and Singson via email so they are updated as to the number of people who have signed.  Guerrero said the campaign serves as a virtual voice for the “voiceless trees.” Read more on Sunstar
Guerrero’s campaign introduction on Change.org:
The Naga-Carcar road widening project puts the 154 trees along the 3.1 kilometer highway from Naga City to Carcar City, south of Cebu in danger of getting axed.   These trees were planted at the turn of the century, ordered by then Cebu Governor Dionisio Jakosalem.  We are all aware of the importance of trees in our ecosystem.  These trees have been the mute witness to Cebu’s History and Development. 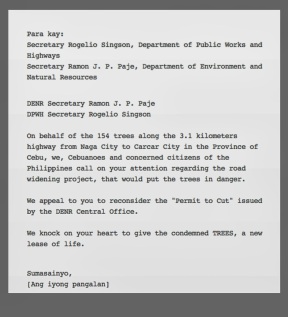 This entry was posted on October 21, 2013 by Paulina Constancia in Care, Unify and tagged environmental crusades, good citizenship, poetry.