While looking for a theme for this week I discovered through Wikipedia’s list of international Observances that July 9th is International No Bra Day. So I went on a further search on the internet about this curious observance but couldn’t really find anything about its history and the organization leading this crusade. All I’ve seen so far are blogs and a Facebook group. When I went back to Wikipedia to check the date list again so I could use the site as an info source, the date had mysteriously disappeared (deleted). Hmmm you have to wonder why…
Anyway, I am still going ahead with this week’s series – “Breasts, Bras & Beyond” which was originally inspired by the so-called ‘International No Bra Day”.
BRA-The Name
Info Source
Bra is short for “brassière”. French brassière – child’s jacket with sleeves. Bras, arm from Latin bracchium – brachium.
The French word brassière refers to a baby’s vest (undershirt) or lifebelt, under-bodice or harness. The word brassière derives from bracière, an Old French word meaning “arm protector” and referring to military uniforms (bras in French means “arm”). This later became used for a military breast plate, and later for a type of woman’s corset. The current French term for brassière is soutien-gorge, literally, “held under the neck” or “throat-support”. In French, gorge (throat) was a common euphemism for the breast.
The term “brassiere” seems to have come into use in the English language about 1893. Manufacturers were using the term by about 1904, Vogue magazine first used it in 1907, and by 1911 the word had made its way into the Oxford English Dictionary.
Check out the word for BRA in other languages:

Throughout recorded history, women have used a variety of garments and devices to cover, restrain, or elevate their breasts. Brassiere or bikini-like garments are depicted on some female athletes in the 14th century BC during the Minoan civilization era. Similar functionality was achieved by both outerwear and underwear. In China during the Ming Dynasty a form of foundation cloth complete with cups and straps drawn over shoulders and tied to the girth seam at the lower back called a dudou (literally ‘belly cover’) was in vogue among rich women.

Popularity continued into the Qing Dynasty (1644–1911). In English they were known as “stomach protectors” or “tummy covers”.Primitive iterations of a brassiere are depicted in early Roman art in the ruins of Pompeii. These depictions date back to as early as 62 AD.
From the 16th century onwards, the undergarments of wealthier women in the Western world were dominated by the corset, which pushed the breasts upwards. In the latter part of the 19th century, clothing designers began experimenting with various alternatives to the corset, trying things like splitting the corset into multiple parts: a girdle-like restraining device for the lower torso, and devices that suspended the breasts from the shoulder for the upper torso.
Garments which more closely resembling contemporary bras emerged by the early 20th century, although large-scale commercial production did not occur until the 1930s. With metal shortages, World War II encouraged the end of the corset. By the time the war ended, most fashion-conscious women in Europe and North America were wearing brassieres. From there the brassiere was adopted by women in Asia, Africa, and Latin America.
Like other clothing, brassieres were initially sewn by small production companies and supplied to various retailers. The term “cup” was not used to describe bras until 1916, and manufacturers relied on stretchable cups to accommodate different sized breasts. Women with larger or pendulous breasts had the choice of long-line bras, built-up backs, wedge-shaped inserts between the cups, wider straps, power Lastex, firm bands under the cup, and even light boning.
In October 1932, the S.H. Camp and Company correlated the size and pendulousness of a woman’s breasts to letters of the alphabet, A through D. Camp’s advertising featured letter-labeled profiles of breasts in the February 1933 issue of Corset and Underwear Review. In 1937, Warner began to feature cup sizing in its products. Adjustable bands were introduced using multiple eye and hook positions in the 1930s.


Since then, bras have replaced corsets and bra manufacture and sale has become a multi-billion-dollar industry. Over time, the emphasis on bras has largely shifted from functionality to fashion.
Read this article “History of the Bra: An Uplifting Story” by Gareth Marples
Here are some curious bras
through the years: 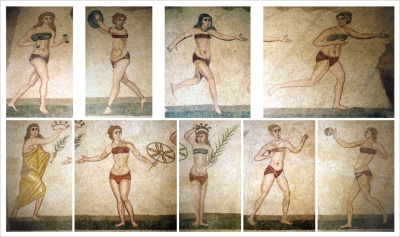 In ancient Rome having ‘bountiful bust’ was unstylish, so 3rd century girls used to wrap bandages around themselves. These bands initially known as aspodesmos or mastodenton was made to flatten breasts and secure during athletics.
(Info and Image Source)

One of the toughest things to shop for is a bra and I think this Cowboy poetry that I found on the internet is worth sharing with you today, enjoy!

Cowboy poetry–buying a bra
By Bill Hirschi
(Source)
You know, I’ve never been much for shopping
In fact I try to stay away from town –
Except when shipping time comes,
I ain’t easily found.


But the day came when I had to go
And I left the kids with Ma.
But before I left, she asked me,
“Would you pick me up a bra?”


Without thinkin’ I said “sure,”
How tough could that job be?
I bent down and kissed her
and said, “I’ll be back by three.”


Well, when I done the things I needed
I started to regret
Ever offering to buy that thing,
I was working up a sweat.


I crossed the street to the ladies shop
With my hat pulled over my eyes,
I wasn’t takin’ any chances
On bein’ recognized.


I walked right up to the sales clerk
I didn’t hem or haw.
I told the lady right straight out,
“Ma’am, I’m here to buy a bra.”


From behind I heard some snickers
So I turned around to see
At least fifteen women in the store,
And they’s all gawkin’ at me!


“What kind would you be looking for?
“ ”Well,” I just scratched my head.
I’d only seen one kind before
“Thought bras was bras,” I said.


She gives me a disgusted look
”Well sir, that’s where you’re wrong.
Come with me,” I heard her say,
And like a dog, I tagged along.


She took me down this alley
Where bras was on display.
Well I thought my jaw’d hit the floor
When I seen that lingerie.


They had all these different styles
That I’d not seen before -
I thought that I’d go crazy
‘fore I left that women’s store.


They had bras you wear for eighteen hours,
And bras that cross your heart.
There was bras that lift and separate,
And that was just the start.


They had bras that made you feel
Like you weren’t wearing one at all.
And bras that you can train in
When you start off when you’re small.


Well, I finally made my mind up
Picked a black and lacy one.
I told the lady,
“Bag it up,” And figured I was done.


But then she asked me for the size.
I didn’t hesitate.
I knew them measurements by heart,
“Six and seven eighths.”


I thought that she’d go into shock,
Musta took her by surprise.
When I told her that my wife’s bust
Was the same as my hat size.


“That’s what I use to measure with,
I figured it was fair;
But If I’m wrong I’m sorry ma’am.”
This drew another stare.


By now a crowd had gathered
And they’s all crackin’ up.
When the lady asked to see my hat,
To measure for the cup.


When she finally had it figured
I gave the gal her pay
I turned to leave the store,
Tipped my hat and said, “Good day.”


My wife heard the whole story
‘fore I ever made it home.
She’d talked to fifteen women
Who’d called her on the phone.


She was still a-laughin’
But by then I didn’t care.
Now she don’t ask and I don’t shop
For no more women’s underwear.

This entry was posted on July 9, 2012 by Paulina Constancia in Uncategorized.