July 9 is celebrated by some as “International No Bra Day”. This week, I take the great opportunity to look into the world of  “Breasts, Bras & Beyond”.
Today, I bring you Bette Midler and a most entertaining song about “Otto Titsling”,inventor of the world’s first over-the-shoulder-boulder-holder.

The Story Behind the Song

There is an urban legend that the brassiere was invented by a man named Otto Titzling (“tit sling”) who lost a lawsuit with Phillip de Brassiere (“fill up the brassiere”). This originated with the 1971 book Bust-Up: The Uplifting Tale of Otto Titzling and the Development of the Bra and was propagated in a comedic song from the movie Beaches.(Info Source) 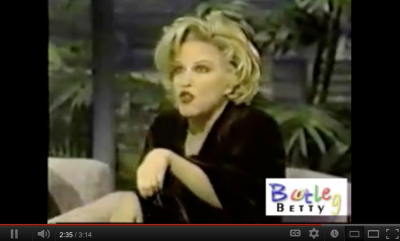 “Otto Titsling”
Lyrics Source
“This next story is a true story.
It concerns two of my favorite subjects:
industrial theft . . . and-a t-ts!
Mmm, what a combo! This is the story . . .
The inventor of the modern foundation garment
that we women wear today was a German scientist
and opera lover by the name of Otto Titsling!
This is a true story.
His name was Otto Titsling.
What happened to Otto Titsling shouldn’t happen to a schnauzer.
It’s a very sad story. I feel I have to share it with you.”


Otto Titsling, inventor and kraut,
had nothing to get very worked up about.
His inventions were failures, his future seemed bleak.
He fled to the opera at least twice a week.


One night at the opera he saw an Aida
who’s t-ts were so big they would often impede her.
Bug-eyed he watched her fall into the pit,
done in by the weight of those terrible t-ts.


Oh, my god! There she blows!
Aerodynamically this bitch was a mess.
Otto eyeballed the diva lying comatose amongst the reeds,
and he suddenly felt the fire of inspiration
flood his soul. He knew what he had to do!
He ran back to his workshop
where he futzed and futzed and futzed.


For Otto Titsling had found his quest:
to lift and mold the female breast;
to point the small ones to the sky;
to keep the big ones high and dry!


Every night he’d sweat and snort
searching for the right support.
He tried some string and paper clips.
Hey! He even tried his own two lips!


Well, he stitched and he slaved
and he slaved and he stitched
until finally one night, in the wee hours of morning,
Otto arose from his workbench triumphant.
Yes! He had invented the world’s first
over-the-shoulder-boulder-holder. Hooray!


Exhausted but ecstatic he ran
down the street to the diva’s house
bearing the prototype in his hot little hand.
Now, the diva did not want to try the darn thing on.
But, after many initial misgivings,
she finally did.
And the sigh of relief that issued forth
from the diva’s mouth
was so loud that it was mistaken by some
to be the early onset of the Siroccan Winds
which would often roll through the Schwarzwald
with a vengeance!
Ahhhhh-i!


But little did Otto know,
at the moment of his greatest triumph,
lurking under the diva’s bed
was none other than the very worst
of the French patent thieves,
Philippe DeBrassiere.
And Phil was watching the scene
with a great deal of interest!


Later that night, while our Brun Hilda slept,
into the wardrobe Philippe softly crept.
He fumbled through knickers and corsets galore,
’til he found Otto’s titsling and he ran out the door.


Crying, “Oh, my god! What joy! What bliss!
I’m gonna make me a million from this!
Every woman in the world will wanna buy one.
I can have all the goods manufactured in Taiwan.”


The result of this swindle is pointedly clear:
Do you buy a titsling or do you buy a brassiere?

This entry was posted on July 9, 2012 by Paulina Constancia in Uncategorized.