Welcome to a new week on DDoA! As we approach Halloween (Oct 31st), All  Saints’ Day (Nov 1st)  and All Souls’ Day (Nov 2nd), we look into Mexican traditions related to the  Día de los Muertos/Day of the Dead. We pay special attention to Calaveras (skulls) – history , artistic interpretations and other curiosities.

-From the “Latin word  calvaria: which was a translation of the original Aramaic gulgulta ‘skull,’ came from calvus ‘bald,’ based on the notion that a human skull has lost all its hair (and skin and muscle) and is effectively bald. We recognize calvus as the source of the synonymous Spanish calvo.”  via Steven Schwartzman/wordconnections

And now I bring you the most famous of all calaveras:  LA CALAVERA CATRINA 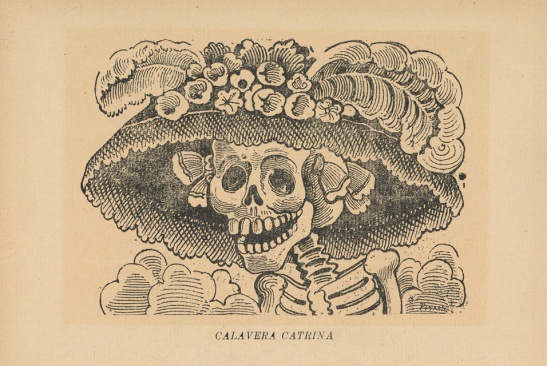 Important facts about “La Calavera Catrina” you may be interested to know about:
Info via Wikipedia

Details of first appearance: Etching created sometime between 1910 and 1913 by José Guadalupe Posada as a broadside

What was La Catrina intended to depict?
The original broadside (leaflet) describes a person ashamed of his Indian origins and dressed imitating the French style while wearing lots of makeup to make his skin look whiter.2 This description also ties to the original name garbancera, which became a nickname given to people of indigenous ancestry who imitated European style and denied their own cultural heritage.

Start of La Catrina’s Fame:  its appearance in the first posthumous edition,entitled “Monografia: Las Obras de José Guadalupe Posada, Grabador Mexicano, which was published from the original plates in 1930; Calavera Catrina (Dapper Skeleton) can be found on plate 21 of Posada’s Popular Mexican Prints

Connection with Mexico & Day of the Dead:
“La Catrina has become the referential image of Death in Mexico, it is common to see her embodied as part of the celebrations of Day of the Dead throughout the country; she has become a motive for the creation of handcrafts made from clay or other materials, her representations may vary, as well as the hat.” – J.G. Posada 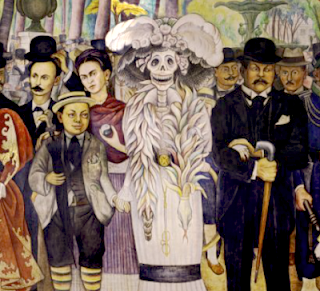 Close-up of Rivera’s mural showing  Frida, La Catrina
Posada (with the cane) and Rivera himself as a young boy.

Rivera portrays a culmination of 400 years of Mexico’s major figures, which include himself, Posada, and his wife Frida Kahlo. Rivera took inspiration from the original etching and gave Calavera a body and more of an identity in her elegant outfit as she is poised between himself and Posada. It appears that Rivera wanted to include the tradition of welcoming and comfort the Mexicans have with death. The identity of a lady of death, goes all the way back to the heritage of the Aztec goddess Mictecacihuatl .” 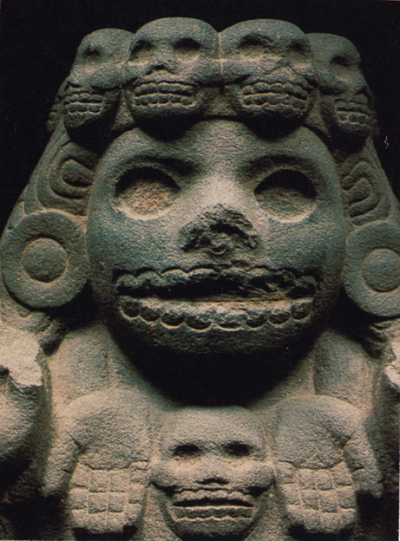 In Aztec mythology: Mictecacihuatl
Queen of the Mictlan (the underworld)
-ruling over the afterlife with another deity designated as her husband.
-her roles: 1)to keep watch over the bones of the dead; 2)preside over the ancient festivals of the dead: which has evolved from Aztec traditions into the modern Day of the Dead after synthesis with Spanish cultural traditions.
Info via urban dictionary; Image via Tumblr
Learn more about Celebration of the Dead History

Symbolism of La Catrina (as explained by curator David de la Torre from the LA Plaza de Cultura y Artes)
She has come to symbolize not only El Día de los Muertos and the Mexican willingness to laugh at death itself, but originally Catrina was an elegant or well-dressed woman, so it refers to rich people, de la Torre said. “Death brings this neutralizing force; everyone is equal in the end. Sometimes people have to be reminded.”

The culture of La Calavera Catrina
The culture of La Catrina has ties to political satire;  a well-kept tradition as the original was inspired by the polarizing reign of dictator Porfirio Díaz – the modernisation and financial stability that he brought to Mexico is  dwarfed by the magnitude of his government’s repression, corruption, extravagance and obsession with all things European. Wealth was in the hands of  the privileged few, bringing discontent in the hearts of the suffering plenty -leading to the 1910 rebellion that toppled Diaz in 1911 and became the Mexican Revolution.

Here are some interpretations of La Calavera Catrina by Mexican artists:

This exceptional and highly prestigious painter and sculptor, born in Michoacan, has always been fascinated by Death.

Death is a constant in his work, it appears everywhere in the shape of symbolisms or skeletons and skulls. In 1982 Juan discovered the wonders of clay and starts creating “Catrinas”.

Throughout the years the catrina has been reproduced by many artists, but never with such talent as Juan Torres, the catrina maker. His catrinas are unique, never two to be the same. Don Juan’s work has been imitated by many, always without success. Read more 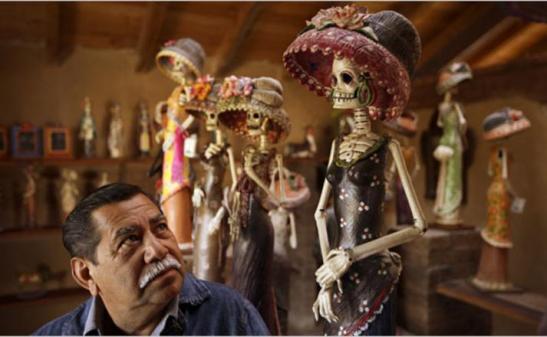 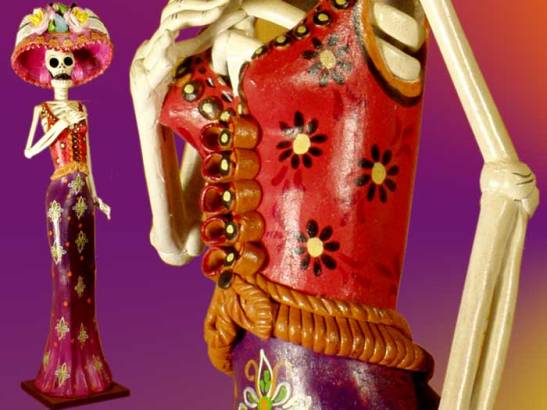 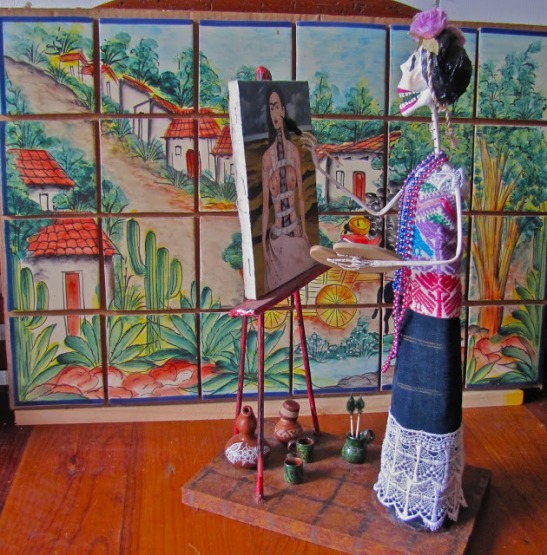 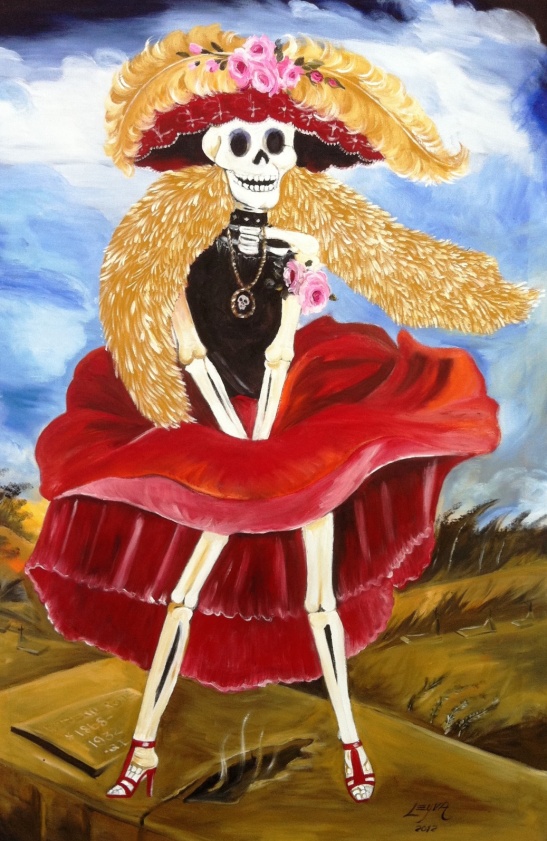 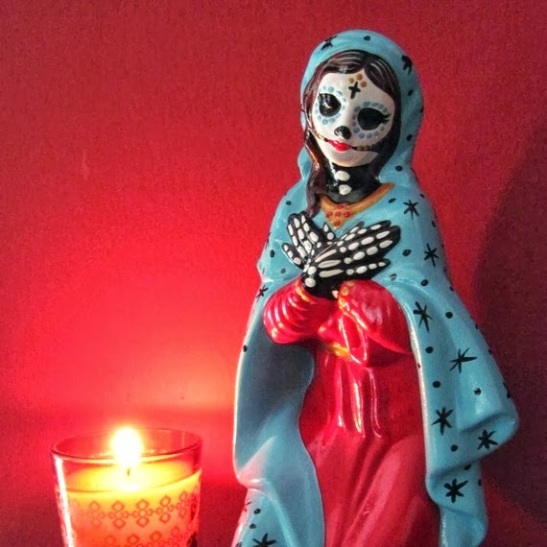 So do…as the Mexicans do- keep an image of La Catrina and remind yourself not to be vain, cruel or conceited -for you too one day shall die like everyone else.

This entry was posted on October 27, 2014 by Paulina Constancia in Create and tagged sculpture, world cultures.