After a week of stories from yoga professionals, I now feature something that relates to the country of origin of Yoga; I bring you Snakes & Ladders. Yes, it’s a special series inspired by the board game that few may know originated from India (just like Yoga).

Origins of SNAKES & LADDERS
According to Princeton University

Snakes and Ladders originated in India as a game based on morality called Vaikuntapaali or Paramapada Sopanam (the ladder to salvation). This game made its way to England, and was eventually introduced in the United States of America by game pioneer Milton Bradley in 1943.

The game was played widely in ancient India by the name of Moksha Patamu, the earliest known Jain version Gyanbazi dating back to 16th century. The game was called Leela and reflected the Hinduism consciousness around everyday life. Impressed by the ideals behind the game, a newer version was introduced in Victorian England in 1892, possibly by John Jaques of Jaques of London.

Moksha Patamu was perhaps invented by Hindu spiritual teachers to teach children about the effects of good deeds as opposed to bad deeds. The ladders represented virtues such as generosity, faith, humility, etc., and the snakes represented vices such as lust, anger, murder, theft, etc. The moral of the game was that a person can attain salvation (Moksha) through performing good deeds whereas by doing evil one takes rebirth in lower forms of life (Patamu). The number of ladders was less than the number of snakes as a reminder that treading the path of good is very difficult compared to committing sins. Presumably the number “100” represented Moksha (Salvation). In Andhra Pradesh, snakes and ladders is played in the name of Vaikuntapali. via princeton.edu

Game of Snakes and Ladders
gouache on cloth (India, 19th century)
via Wikipedia

The Western children’s game Snakes and Ladders, or Chutes and Ladders, comes from the Indian game for adults called Gyan Chaupar, the “Game of Knowledge”.  Gyan Chaupar teaches the Hindu spiritual path to moksha, which is liberation from reincarnation. 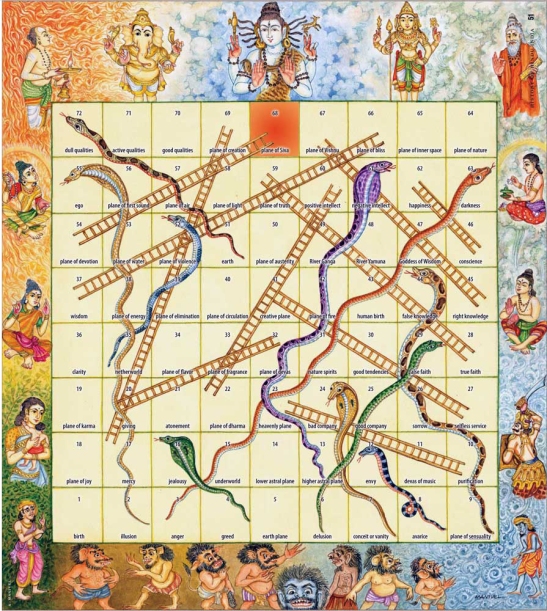 Versions of Snakes and Ladders

“The game was sold as Snakes and ladders in England before Milton Bradley introduced the basic concept in the United States as Chutes and ladders, an “improved new version of … England’s famous indoor sport.” Its simplicity and the see-sawing nature of the contest make it popular with younger children, but the lack of any skill component in the game makes it less appealing for older players.” via pinceton.edu

“The game was transported from India to England by the colonial rulers in the latter part of the 19th century, with some modifications. The modified game was named Snakes and Ladders and stripped of its moral and religious aspects and the number of ladders and snakes were equalized.” – V Venkata Rao, Ahmedabad  via timesofindia

Here are a few curious versions of Snakes and Ladders through the years: 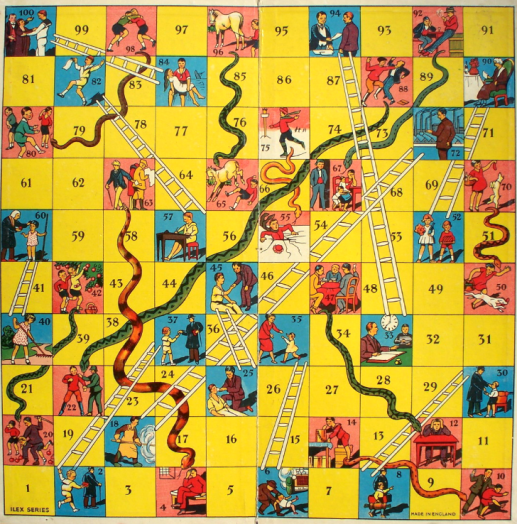 A game about life indeed!
Image via imgkid

I like it that this vintage one integrates a bit of values,
a little taste of what the original game was intended for
Image via imgkid

And in more recent years… 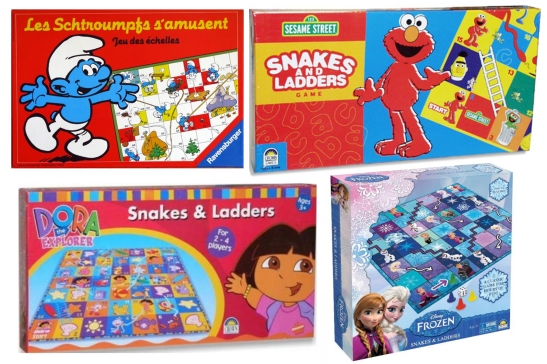 Through the years the game Snakes and Ladders has definitely adapted a variety of  themes – from Chaplin to Dora, and very lately- even Disney’s Frozen. Some designers do not stop with theme though, they have also gone bigger and outdoors…

Giant Snakes and Ladders
From Rittenhouse

Life-size version of SNAKES and LADDERS
Special feature at the OCTOBURST Children’s Festival
The Esplanade. Singapore

Make your own Snakes and Ladders board game, check out these Free Templates from Shauna

So do…play board games for family bonding, but if you can play a game that also instills good values even better!

This entry was posted on October 20, 2014 by Paulina Constancia in Bond, Teach and tagged games, world cultures.