All week I featured classical cellists with traditional instruments, today in the last feature of this special series Cello con  affetto,  I bring you JUNK CELLOS and the people who made them (luthiers) and the musicians who play them (cellists). 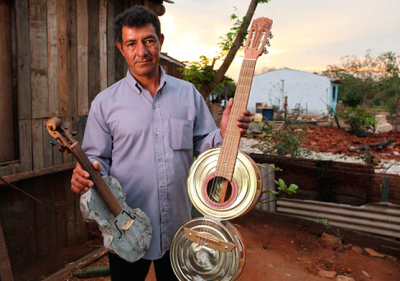 Nicolás “Cola” Gómez:
Image & Info via landfillharmonicmovie
Nicolas, grew up in Emboscada, 50 Kilometers away from Asuncion. His father died when he was 7 years old and that’s when he had to start working to help his mom who was left with 9 children. After doing 30 years of hard labor work in construction, he decided to move to Cateura where he was lucky enough as he said, to start working as a trash collector & recycler. This gave him a daily steady income, he says “there would always be garbage and that means I will always have a job”. It is in Cateura where he meets Favio*. Together they start the construction of the recycled instruments.
*Favio Chávez: Teacher, Mentor and Director of The Recycled Orchestra of Cateura

It started with a violin. Then Favio and Cola started creating more instruments made out of recycled wooden pallets, paint cans, oil thin cans, forks and coins. Soon they would have enough instruments to form an Orchestra. The recycled instruments serve another, more practical purpose: The kids can safely carry them. “For many children, it was impossible to give them a violin to take home because they had nowhere to keep it and their parents were afraid they would be robbed or the instrument would be sold to buy drugs.” – FAVIO CHÁVEZ , via landfillharmonicmovie

Just to demonstrate how curious the components are of these cellos, check this out: Bebi’s cello is made with an oil can, wood that was thrown away in the garbage, pegs -made out of an old meat tenderizer tool and another part from a tool to make gnocchi. As for Hugo’s cello, the unique components are the steel brush and wooden spoon used as pegs.
—-
Watch the teaser of the upcoming documentary film Landfillharmonic. Bebi is one of the young musicians featured.

A Little about the Documentary film Landifllharmonic
The world generates about a billion tons of garbage a year. Those who live with it and from it are the poor – like the people of Cateura, Paraguay. And here they are transforming it into beauty. Landfill Harmonic follows the Orchestra as it takes its inspiring spectacle of trash-into-music around the world. Follow the lives of a garbage picker, a music teacher and a group of children from a Paraguayan slum that out of necessity started creating instruments entirely out of garbage. Landfill Harmonic is a beautiful story about the transformative power of music, which also highlights two vital issues of our times: poverty and waste pollution. via landfillharmonicmovie

Ben and Jon made five stringed musical instruments from scrap metal, wood and string as part of a BBC Four TV documentary ‘Scrapheap Orchestra’ which was shown on BBC Four in December 2011.via West Dean College, UK

The documentary made by Love Productions is hosted by Charles Hazelwood, inspirational conductor of the BBC concert orchestra and follows the process as musical instrument makers from around the country rise to the challenge of creating an entire orchestra from scrap materials. (The journey culminates in a performance at the Royal Albert Hall in July (2012) of a specially arranged version of Tchaikovsky’s 1812 Overture)

The finished cello made from a Jaguar car bonnet
Photo: BBC/Richard Cannon
via gramophone

The Scrapheap Orchestra cellists in concert
Photograph: BBC/Chris Christodoulou
via The Guardian

Read the CALL for luthiers for this BBC documentary project

The challenge was seemingly impossible. No instrument could be the same as there would not be enough junk; but some did work. One cello was made out of a Land Rover fuel tank, which on first rehearsal “sounded like a hornet trapped in a jam jar”, maker Ben Hebbert explained. “But we cut bits away and adjusted. It’s ended up as a beautifully playable instrument,” he added, although bowing it does not create the ideal sound. via music room

Paul Snider is an actor / musician / song-writer. After graduating with a Joint Honours Music and Computer Science degree from the University of Waterloo, he wrote software for computer companies while pursuing his performance career in theatre. In 1997 he moved to Vancouver with a software start-up company and helped build it to one of the fastest growing technology companies in BC, being named one of “Business In Vancouver’s Top 40 Under 40”. In 2009 he departed the software industry completely to work fulltime on his entertainment company Born To Fly Productions Inc.
Read more on JUNK!
…Paul experimented with creating music from different sounds when he produced a rendition of ‘O Canada’ using only Canadian animal sounds during the Vancouver 2010 Olympics, and later produced a unique music video using only sounds he recorded on a backpacking trip through Eastern Europe. Junk! is a continuation of this concept, on a larger scale.Paul shares the process of making the cello or “tin cello”

The cello, or the ‘Tincello’, uses an old tin garbage can (donated kindly from the Dunbar Haunted House!) as the resonator, which seems to work quite well. Hard PVC tubing is the neck, and a computer circuit board, the first board I ever bought (circa 1989!) is the peg box. A tie helps to hold the strings in place, with support wiring underneath. The sound is pretty good, resonating in the tin of the can, but we’ll see if it is playable once I find an actual cello player! via the musicofjunk

Watch this promotional video of JUNK!

To have a closer look at the JUNK! Tincello, watch this rehearsal video

‘Junk!’ is a new musical with an original score played on original instruments made from junk. Follow the cast in their musical escapades through a junkyard: a wheel barrow bass, a garbage can cello, hub caps, PVC tubing, mousetraps and more junk all add to the originality of this orchestra of the imagination. JUNK! The Musical debuts at Vancouver’s Fringe Festival at the Firehall Arts Centre, September 4 – 14, 2014.
http://www.facebook.com/TheMusicOfJunk
Twitter: TheMusicOfJunk

Mexican Artist-luthier Pedro Reyes
Reyes originally studied architecture at the Ibero-American University in Mexico City, which he says has stuck with him. “Architects often have a mindset where you solve a problem, so you have a set of needs that you have to address,” he says. “Often I feel that my projects have to have concrete applications.” No art for art’s sake here.
Info & Image via standard-uk
“I believe in the power of art to produce change;
art is a vehicle to transform society.”
– Pedro Reyes

“From the 6,700 destroyed weapons he received from the Mexican Secretary of Defense, Reyes created two groups of instruments which will be exhibited together for the first time at Lisson Gallery. The first, a series titled Imagine, is an orchestra of fifty instruments, from flutes to string and percussion instruments, designed to be played live. The second, Disarm, is a never-before-exhibited installation of mechanical musical instruments, which can either be automated or played live by an individual operator using a laptop computer or midi keyboard.” via Lisson Gallery 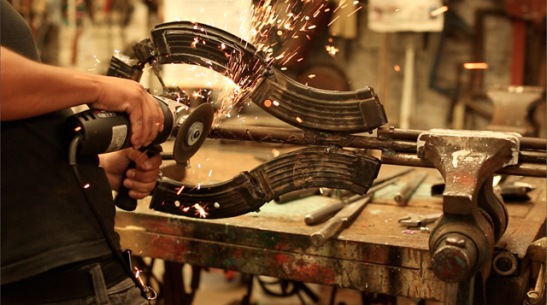 At Pedro’s workshop: weapons are transformed into musical instruments Image via colossal
FYI: 1) As of 2013-‘Nearly 80,000 deaths by gun-shot have occurred in Mexico in the last 6 years’ ; 2) Pedro Reyes made musical instruments using some of the 6,700 guns seized by the police from drug cartels in Ciudad Juarez that were offered to him as scrap metal and here’s why…3) In 2008, Reyes had famously melted 1,527 guns, made 1,527 shovels with them, and planted 1,527 trees in Mexico. Info via buzz feed 4) Reyes worked with a team of 6 musicians, and some metal workers for 2 weeks and came, to transform these guns into musical instruments.  5) Here’s what he came up with: a veritable orchestra of 50 musical instruments: including winds, strings and percussion Info via flippies

As Reyes explained, transforming the shape of the guns was not the full extent of the project. Many of those weapons had taken life or had been used for other evil deeds. Melting, shaping, and twisting them into something which could create beautiful music was “a sort of exorcism”, and “the music expelled the demons they held, as well as being a requiem for lives lost.” via flippies

Just so you understand the picture of violence in the Mexican city of Juarez (across from El Paso, Texas):
Juarez, a city of about 1.3 million people that averaged about 10 killings a day at the height of the violence. In 2010, Ciudad Juarez, across from El Paso, Texas. Juarez had a murder rate about 230 per 100,000 inhabitants. The nationwide rate for the U.S. that year was 4.8. via Huffington Post

Pedro’s instruments are not made for individual musicians, thus there are no cellists directly associated with his weapons-turned-cellos. Here is an image I screen-grabbed from his interview on Momentum, showing a group of musicians making beautiful music using Pedro’s masterpieces. Watch their performance here

“A weapon kills people and makes people in cities dominated by fear;
but  if you turn it into an instrument, it’s like social gold.
It brings people together and you build trust.”
– Pedro Reyes

“It occurred to me to make musical instruments, because music is the opposite of weapons.
This exercise of transformation we see with the guns, is what we would like to see in society.”
– Pedro Reyes

So do…as these nontraditional luthiers have done, whether in cello making or life – try to think outside the box and do your part in helping save the environment and being an instrument of peace.

This entry was posted on September 7, 2014 by Paulina Constancia in Care, Create, Explore and tagged Creative Professionals, music.