The Art of Community Living in Vancouver 5: Co-op Radio

Yesterday I featured how Vancouverites are letting their voices be heard through a green light campaign in the False Creek neighbourhood. Today, I bring you yet another commendable practice of community living in this beautiful Pacific coast city – Co-op Radio!

A Little About Co-op Radio

Co-op Radio’s more than 400 volunteer programmers provide programming 24 hours a day in the areas of arts, public affairs, music and in languages other than English. We strive to provide programming that does not discriminate against people on the grounds of sex, race, age, class, ability, sexual orientation, or anything else. Our first priority is to provide a media outlet for the economically, socially or politically disadvantaged. We provide news and perspectives that are not otherwise accessible – information that is not covered by the conventional media or perspectives that challenge mainstream media coverage. 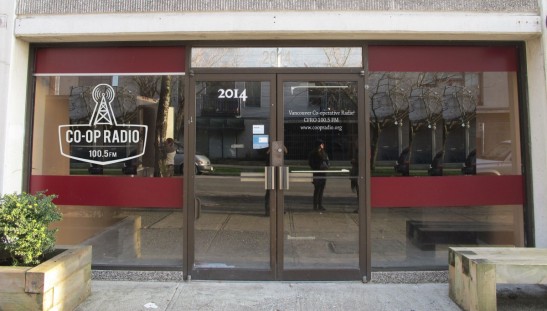 To give you an idea of the diverse programming of Co-op Radio:
TOP:
(Left) Drishti Point program: providing inspiration and information for yoga practitioners of all types, (spiritual and health-oriented program); Mondays at 5pm.
(Right) In The Pines: Old Time, Swing, and Bluegrass music to Co-op Radio; part of a great block of music programming; Sundays at 2:30pm

The World Poetry Café is a regular  program on Co-op Radio that gives guest poets the opportunity to share their words with a greater audience. There is even no need to overexert one’s voice since the microphones are ultra sensitive, hahahah

On the July 15 show, hosts were Ariadne Sawyer and Anita Aguirre Nieveras and the featured poets were Alan Girling and myself.  Thank you Ariadne & Anita! Thank you World Poetry Café! So happy to reconnect with you! (My last presentation/interview on the program was in 2003) 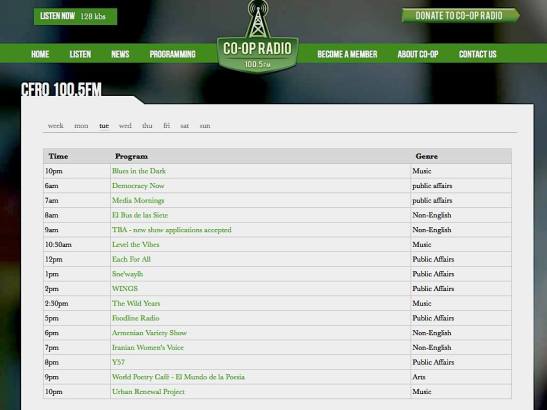 Featured poets for the night were Alan Girling and myself

Visit worldpoetry.ca to read some of the poems we shared on the program.

So happy to be reading poems alongside Alan Girling – professor, poet, playwright..

The concept of Coop Radio is really great, every city should have one. Apart from providing a media outlet for the economically, socially or politically disadvantaged, the co-op concept also encourages the spirit of volunteerism and forges new friendships. Way to go Co-op Radio! Bravo Vancouver!

“Never doubt that a small group of thoughtful, committed citizens can change the world; indeed, it’s the only thing that ever has.”
-Margaret Mead (1902-1978); Cultural Anthropologist

So Do… collaborate with like-minded individuals in your community! Inspire and be inspired by each other. Together you can make great things happen!

This entry was posted on July 25, 2014 by Paulina Constancia in Collaborate, Communicate and tagged Creative Professionals, inspiring communities, poetry.