A Peek Into Chinese Peranakan Life in Penang 1: Dining Moods

On a recent trip to the UNESCO World Heritage City of George Town in Penang, Malaysia, I had the privilege of visiting the Peranakan Mansion. It showcases thousands of tangible evidence of the everyday life of the Chinese Peranakans in Penang (also called Pinang).

“The Peranakans, also known as the Babas and Nyonyas, was a prominent community of acculturated Chinese unique to this part of the world, especially in the Straits Settlements (Penang, Malacca and Singapore) hence its other name, the Straits Chinese. Adopting selected ways of the local Malays and later, the colonial British, the Peranakans had created a unique lifestyle and customs which had not only left behind a rich legacy of antiques but its cultural influences like cuisine and language are still evident in Penang today.” via Pinang Peranakan Mansion

“Baba (for men) and Nyonya (for women) was a term first used by Malays to differentiate these locally born Chinese from later immigrants.” via thebabahouse
This week I wish to share with you some of these heritage articles that I saw at the Peranakan mansion and highlight a particular aspect of their culture. Today I bring you – Color Coded Dinnerware
For everyday:
Dinnerware with simple floral motif

This set has a pink tint to it, but other families may use a different colour for daily use. Since we have this daily dinnerware for an example, let’s look at the symbolism of pink. It symbolises LOVE in Chinese culture. via nationsonline
I don’t want to say PINK was for everyday use because at the Peranakan Museum in Singapore, they say it’s a colour specially used at wedding banquets.  Read more about the Peranakan wedding banquet dinnerware.
For the period of mourning:
Dinnerware with blue motif 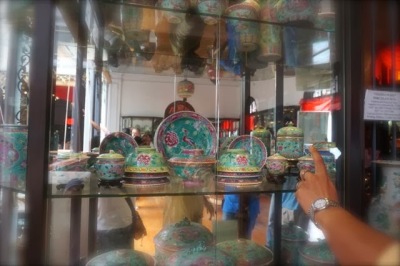 Symbolism of green in Chinese culture:
growing, generating, sprouting, striving, refreshing, balancing, calming, healing, self assurance, foundation, benevolence, health, harmony, sensitivity, patience vs anger
via nationsonline
That’s our guide pointing to the Phoenix design on the dinnerware almost exclusively used for Chinese New Year. I don’t really know much about this mythical bird so I searched the internet and found this:
“The Phoenix or “Fenghuang”  has very positive connotations. It is a symbol of high virtue and grace. The Fenghuang also symbolizes the union of yin and yang. It appears in peaceful and prosperous times but hides when trouble is near.
In ancient China, they can often be found in the decorations for weddings or royalty, along with dragons. This is because the Chinese considered the dragon and phoenix     symbolic of blissful relations between husband and wife, another common yin and yang metaphor.
In some traditions it appears in good times but hides during times of trouble, while in other traditions it appeared only to mark the beginning of a new era. In China and Japan it was a symbol of the imperial house, and it represented “fire, the sun, justice, obedience, and fidelity”. via LCS

This entry was posted on March 17, 2014 by Paulina Constancia in Explore and tagged travel, world cultures.