Welcome to Day 4 of Animal Art here on DDoA! Today we look into the charming animal collage art of Megan Coyle.

Megan Coyle is a collage artist based in the Washington, DC area. She creates artwork from magazine pages using a technique she calls “painting with paper.” She cuts the paper into different shapes and layers them in such a way that they look almost like the brushstrokes in a painting. 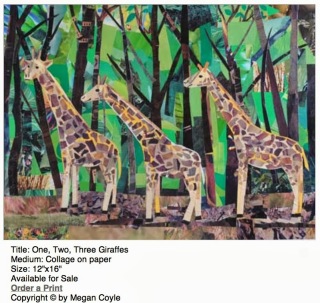 Go to her website to ORDER A PRINT
A Little About Megan Coyle, according to Megan…
Hi, I’m Megan Coyle…

I grew up in Alexandria, Virginia. As a child, I took several classes at a local art gallery and often wrote and illustrated my own stories. I became more serious about art in high school, but by the time I entered college, I was almost positive that I would someday become a writer. Several writing workshops later, my zeal for writing had passed on—I was a mess trying to figure out if anything I wrote was ever any good. Thus it was time to give up writing and turn back to my roots in art.

In 2008, I graduated from Elon University with a degree in Painting and Creative Writing. For my senior thesis, although I studied painting, I created several portrait collages from magazine strips. This series became my first cohesive body of work, showcasing a technique I call “painting with paper.” Since then, I’ve continued to work on honing and developing my craft as an artist…”Read more
—
Megan has written and illustrated her first book,
“DUCK & FISH”. Preview it on BLURB.
Today’s Quote on Animals:
“I ask people why they have deer heads
on their walls. They always say
because it’s such a beautiful animal.
There you go.
I think my mother is attractive,
but I have photographs of her.”
– Ellen DeGeneres

This entry was posted on November 21, 2013 by Paulina Constancia in Create and tagged Creative Professionals.