September 8th and 9th this year are specially marked days for kite flying enthusiasts in Singapore. NTUC Income (the country’s leading composite insurer) sponsors the annual Kite Festival Singapore – a time for young and old to have some good clean fun.

As Singapore prepares for this weekend’s festival, I thought it would be a great opportunity to do a week’s feature on “Kite Flying Around the World”. Today I share with you Kite sculptures & Trivia.

Some Amazing Kite Sculptures
from Around the World 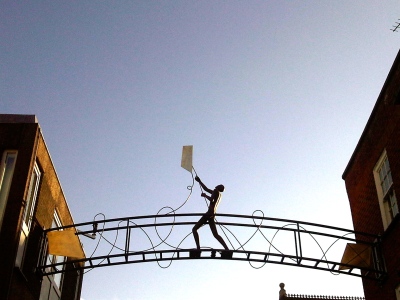 The Kite Flyer
Bronze Figure & Bridge
Sculpture by Marzia Colonna
Parchment Street, Winchester, Hampshire, England
Image Source
The Kite Flyer is a bronze figure of a young man flying a golden kite on a bridge. The work was commissioned by Winchester City Council and installed in April 2009. The sculpture arcs across Parchment Street at a height of nearly six metres creating a popular new landmark for the city. The street is one of the most significant historical streets in Winchester and clearly visible from the high street.

‘3 Boys & Kite Weathervane’
Custom handmade copper weather vane
by West Coast Weather Vanes, USA
Image Source
World Kite Trivia
Info Source
Read more Kite TRIVIA
“You can’t fly a kite unless you go against the wind
and have a weight to keep it from turning a somersault.
The same with man. No man will succeed
unless he is ready to face and overcome difficulties
and is prepared to assume responsibilities.”
William J. H. Boetcker

This entry was posted on September 4, 2012 by Paulina Constancia in Uncategorized.