Tokens of Friendship (6) – The Three Idiots

Friendship Day celebrations occur on different dates in different countries. The first World Friendship Day was proposed for 30 July 1958. On 27 April 2011 the General Assembly of the United Nations declared July 30 as official International Friendship Day. However, some countries, including the USA and India, celebrate Friendship Day on the first Sunday of August.
When we care about a friend, it seems natural to have the urge to show it to them by means of a gift or token. This week I bring you Tokens of Friendship.
Read more on International Friendship Day
Today, I feature the Indian film “3 Idiots”. Very different from the other tokens of friendship I have featured this week, Rancho (Aamir Khan), the star idiot in the movie, gives two intangible gifts in the form of wise advice. One is that it is important to find and follow one’s true calling and the second is that when the going gets tough just chant “AAL IZZ WELL!” (All is well) and you will gain the courage to face your troubles. 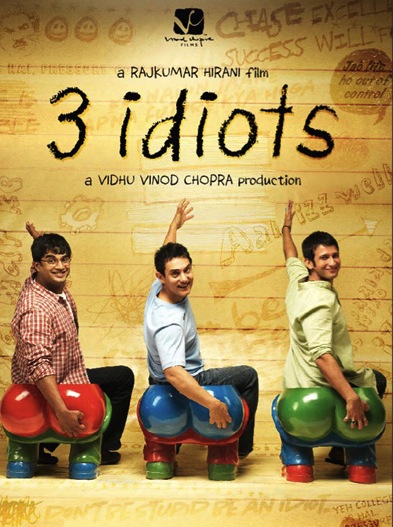 Watch the 3 Idiots on YouTube
“The impact of the film is so overwhelming that it leaves you spellbound for hours after it has ended…”
– Sarita Tanwar of Mid-day –
“Whatever the problem in life is… just say to yourself ‘Aal Izz Well’.. This wont solve your problems but it will give the courage to face it..” “Chase Excellence and success will follow”.. ” Life is not about getting marks, grades but chasing your dreams”.. These are the golden rules which 3 IDIOTS teaches you in a very light and entertaining way.. The movie makes you laugh and in the process you learn many golden rules which can alter your life in a big manner… -Naman Kapur,IMDb Review-

Based on Chetan Bhagat’s novel, Five Point Someone (though only a miniscule part has been adapted from the book; the rest is all original), here’s a story of three friends studying in an engineering college Rancho (Aamir Khan), Farhan (R Madhavan) and Raju (Sharman Joshi).
Rancho is the rebel among them always questioning things and believing that learning is more than just the usual mode of education.   He encourages his friends to look beyond the ordinary and soon earns the wrath of the college director Viru Sahasrabuddhe (Boman Irani).   Despite his fun and frolicking, Rancho always surprises everyone by topping the class. He even manages to win the affections of the director’s daughter Pia (Kareena Kapoor). But Rancho’s greatest contribution is making his friends realise their true calling.   The twist comes on Graduation Day. After being awarded the Student Of The Year, Rancho mysteriously disappears into oblivion.   Years later, Farhan and Raju, finding a common thread, embark on a journey to find their friend.
3 Idiots is a story of friendship, hope, aspirations and most importantly, the goodness of life.   With 3 Idiots, Rajkumar Hirani proves beyond doubt that there’s no better storyteller than him in the present generation.
This isn’t an easy film to make the interplay between characters and the narrative is interestingly woven.
The film switches from present to flashback mode often but not once does Hirani lose the momentum. The medley of emotions that he brings forth as he establishes the film’s structure is indeed commendable.


Check out the Idiots Academy,official Website of the Movie Three Idiots

This entry was posted on August 4, 2012 by Paulina Constancia in Uncategorized.