My family and I were recently on holiday in Kuala Lumpur (KL), the capital city of Malaysia. This week I wish to share with you a few sites and curiosities that I saw while in KL.

Today I feature one of KL’s greatest gems- the Islamic Arts Museum Malaysia (IAMM). Admittedly, it is a great challenge to visit a museum in peace with a two year old in tow. I just feel fortunate enough that I got the chance to view most of the Mosque models before my son threw a tantrum.

Architecture was one of the earliest expressions of Islamic cultural identity and has retained its importance ever since. Conveying the splendour of this monumental art form in a museum setting has been achieved by using a comprehensive collection of scale models. These range from the colossal grandeur of the holiest mosque in Islam – Mecca’s Masjid al-Haram – to the more desolate beauty of Central Asian mausoleums dedicated to Timur and Amir Albukhari. Every corner of Islam is covered in miniature, including the widely overlooked mosques of China and Southeast Asia. To give a more intimate impression of these sacred spaces, the gallery includes a re-creation of a mosque interior. (Source:IAMM)

The Holy Mosque in Mecca is the most important site in the Muslim world. The mosque developed around the Holy Ka’aba, a cube, which was erected by Prophet Ibrahim (as) and his son Prophet Ismail (as) on an earlier sanctuary established by Prophet Adam (as). At one corner of the Ka’aba lies the Black Stone.
In 632 AD, the prophet Mohammed entered Mecca and soon the Ka’aba became the direction that Muslims face five times a day, and the site where they come to perform the Hajj or pilgrimage. Over the years it has witnessed numerous repairs and enlargements.
Today, the new immense extension has multiplied the available prayer space, making it possible to accommodate more than one million worshipers. Architecturally, the mosque reflects a classical neo-Ottoman style, exemplified in the 89 metre tall towering octagonal minarets that flank the King Fahd Gate. This style developed in the Middle East during the 20th century.

———-
It is important for me to mention that if you are ever at this museum, you have to experience dining at its restaurant. It is a unique experience in itself, and the food is unbelievably delicious! I have been to so many museum cafes/restos in my lifetime and nothing comes close to the quality that the IAMM restaurant has to offer. And to complete your IAMM experience make sure you drop by the Museum Shop as it has an impressive selection of books,artefacts,crafts and other gift ideas from around the world. 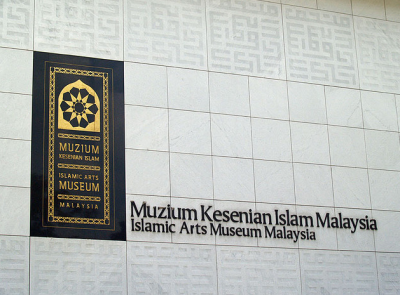 The Museum Restaurant
A very clean, quiet and not too pricey place
to enjoy Middle Eastern cuisine before or after touring the museum

My entrée: MOUSSAKA
with a side of green salad and rice pilaf

This entry was posted on May 14, 2012 by Paulina Constancia in Uncategorized.