We continue RemiNEIGHcin’ with Susan Bright and MANGO, which she fondly refers to as her Hanoverian soul mate.

My story is not unique. It’s one that takes place everyday throughout the world. It’s a story that has a happy ending. So far!

Three years ago I went to teach a student on a chestnut Hanoverian (Donnerhall, Deutchmark) mare that was being leased to breed, but the mare wouldn’t take after many expensive attempts, so the option changed to show the mare as an eventer or dressage horse. Problem was that the mare had a reputation of dumping people and that reduced the potential owners down to me. But she dumped them because they rode her from front to back. She is a very smart mare and it didn’t take her long to to figure out the human. So when my student offered to show me Mango’s “tricks”, I was somewhat skeptical.  Sure enough, “Mango” attempted to dump my student in front of me at the canter. That was it for Mango, she was offered to me to take immediately off the farm and bring home for me to own and work with. And that’s when it all began. 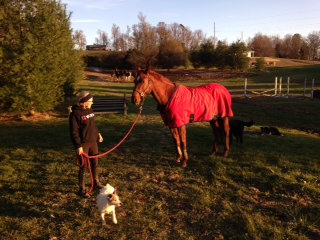 I spent a year with an angry Hanoverian redhead who had an attitude of independence, much like my own. She and I spent time just hacking around like a hunter/trail horse, no questions, no demands, no tantrums. She began to like me, little by little, and also saw that I was a rewarder with molasses cookies and peppermints, massages, and grooming, and LOVE>>>>>>><<<<<<<<. She began to do her sexy low pitched nicker to me in the mornings when I walked in the barn door and she would lick my hand when I passed it into her stall. That to me was love. And commitment. And trust.

So I called up to Meadowlake Equestrian Center to sign up for my monthly clinics with the fabulous Eugene Abello who comes up from Florida. A Grand Prix Dressage Master. And a fantastic person to boot. Mango and I arrived to our first lesson with great hopes of overcoming our canters that had involuntary flying changes, counter canters, and a few hip hops that some might call a buck. Our first lesson was complete with 45 minutes of bucking. Mango would buck, I would lose my seat , and it took 3 strides to get my seat and stirrups, and then she would buck again. I swear she could count. But we finished on a good note. Eugene said “anyone else would have quit and handed the horse over to someone else. No one would have stayed on.” But I was determined.

Now after 3 years of ownership, 2 years of lessons with Eugene, a fabulous chiropractor from Paris (Dr Victor Torres), Mango and I are working towards 2nd/3rd level for next Spring. Eugene wants her to go Grand Prix, but I will be happy to just have a happy mare who looks forward to her work everyday. A mare who opens her mouth for the bit, who doesn’t swish her tail when we work. A mare who hates spurs (so I don’t wear them), a full blooded German attitude to match my own, and who loves to load in the trailer and go new places with me. She is my soul mate. I talk, she listens. She talks, I listen. How much better does it get?

About our Contributor: SUSAN BRIGHT

I’m a California native riding hunters, jumpers, dressage and eventers for 55 years while living in Asia and the USA. As for my educational background: studio art major from Mary Baldwin College and certifed Riding Instructor through advanced riders. As for my work experience with horses: Teaching/training/showing in Kentucky, mostly dressage. One husband, 2 sons (one is a fantastic farrier, the other a Pharmacist), 3 grandchildren, 4 dogs, horses, mules and donkeys!

So do… learn from Susan Bright’s story- believe that change is possible.

This entry was posted on December 29, 2014 by Paulina Constancia in Care, Communicate.