Today we look into the Soap Bubble Castle at the Hakone Open Air Museum and its designer Peter Jon Pearce.

He is the designer of the Cachet Chair, Manufactured by Steelcase, as well as the designer of the Curved Space Diamond Structure, a playground climbing sculpture, installed at playgrounds throughout the U.S., The Brooklyn Children’s Museum, and the Hakone Open Air Museum in Japan, where it has been a popular attraction since 1978.

He is the author of several books including “Structure in Nature Is a Strategy for Design“. His focus on high-performance design, and on achieving sustainability in his designs, is seen in the methodologies used in the design of the Cachet Chair, his work on Biosphere 2, and in the design of the Pearce Ecohouse. The Pearce Ecohouse design, emulates the hexagonal structures of nature and is a green structure built from glass and steel using prefab construction. It is solar powered and will use net-zero energy.
Read more on Wikipedia

Can you guess what inspired this design?

Crystal structure of a diamond
via UNESCO

The answer is DIAMOND CRYSTAL (enlarged 8 Billion times!)…
however we are still featuring it here on our Bubble Talk series because in Japan they call Pearce’s play structure  – The Soap Bubble Castle”

Here’s what I’ve gathered from Wikipedia:
This design has a specific name it is called “Curved Space Diamond Structure” and it  is a patented modular building system representative of a diamond crystal enlarged 8 billion times. These playground climbing sculptures were installed in dozens of parks and playgrounds in California, and also throughout the U.S. and Japan in the mid 1970s and early 1980s. Initially installed as playground climbing sculptures, they have also been exhibited as architectural design pieces, referred to as “usable artworks”, and sold as art at auction.

The climbing sculptures were designed by Peter Jon Pearce who also designed the Biosphere 2 complex in Arizona, worked for Charles and Ray Eames, and was an assistant to Buckminster Fuller.  In addition to playground installations, Curved Spaced Diamond Structures were installed at the 1975 Aspen Design Conference, The Brooklyn Children’s Museum, Epcot theme park in Orlando, Florida, and The Hakone Open Air Museum in Japan. 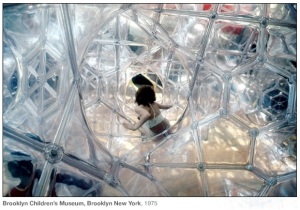 The sculptures are constructed of Lexan, a transparent polycarbonate plastic, having a lifespan of at least 20 years. The material used in their construction is tough enough to use as bulletproofing and the joining systems can withstand tensile loads of up to 1000 psi.  In 1975, a Curved Space structure was constructed in Aspen Colorado, at the “Aspen Design Conference. Because of an overwhelming number of requests from the community, it was left standing until the end of summer, long after the conference was over. Three “Curved Space Labyrinths” installed in The Brooklyn Children’s Museum in 1976, helped to teach children about the geometry of crystal structures. The Curved Space installation at the Hakone Open Air Museum in Japan was originally installed in 1978, and is frequently referred to as “The Soap Bubble Castle”. Marking the 40th anniversary of the museum, there has been an extensive remodel and the Curved Space playground exhibit has been replaced with a new and updated version. Since 1978, the sounds of happy children have always been heard coming from the exhibit at this museum. Originally installed at a playground in the suburbs of Chicago, one of Pearce’s sculptures was available for purchase at the Wright Auction House, which specializes in modern and contemporary art, and according to Art & Antiques Magazine “The structure has subtle richness”.

Here are some photos I took during my visit to the Hakone Open Air Museum in August 2013.
I didn’t know then that Peter Jon Pearce installed several more of this curved space in the USA, check out photos and sites on his website. 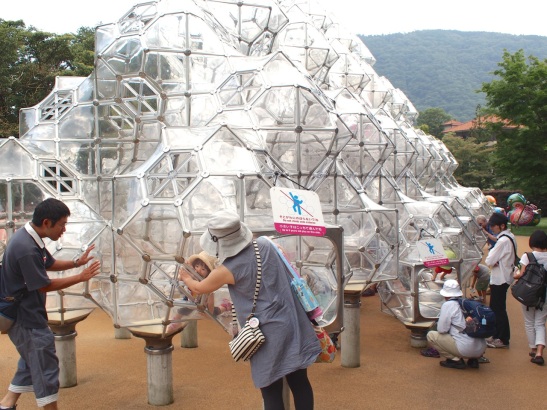 Parents making sure their children make it into the “castle” safely
The Soap Bubble Castle, Hakone Open Air Museum, Japan

FAST FACTS: Curved Space Playground at the Hakone Open Air Museum
– Climbing structures designed by Peter Jon Pearce
– Japanese people frequently referred to it as “The Soap Bubble Castle”,  and so the name stuck
– originally installed in 1978
– on its 40th  anniversary, the museum went through an extensive remodel and the Curved Space playground exhibit was replaced with a new and updated version

Close up of the ‘bubbles’ or ‘crystals” – however way you want to call them
The Soap Bubble Castle, Hakone Open Air Museum, Japan

A perfect home for Peter Jon Pearce’s installation
as there’s always greenery at the end of the tunnel at this open air museum.
The Soap Bubble Castle, Hakone Open Air Museum, Japan

Every child coming out of that Soap Bubble Castle is very likely to use one of these Japanese words  tanoshii (fun) or omoshiroi  (funny/interesting). Learn more Japanese expressions on punipunijapan

Important Information:
The sculptures are constructed of Lexan, a transparent polycarbonate plastic, having a lifespan of at least 20 years. Since most of Pearce’s installations were completed 25 and 30 years ago,they no longer exist. So from what I understand, The Soap Bubble Castle is the last one around of Peter Jon Pearce’s curved space installation and only because the structure was completely replaced on the occasion of the museum’s 40th anniversary. So when you get the chance visit the Hakone Open Air Museum in Japan.  (The great news is that:  if  your school, community  or city could afford it, you can still special order your own curved space climbing structure directly from Peter Jon Pearce.)

So do… as product designer Peter Jon Pearce has done.  Let nature inspire you to design and build structures that will bring out the joyful spirit in people.

This entry was posted on September 18, 2014 by Paulina Constancia in Create, Explore and tagged Creative Professionals, nature-inspired design, playgrounds.