Queries on QUAKES 3: How do Tsunamis relate to earthquakes?

Welcome to Day 3 of ‘Queries on Quakes’. Today we will learn how TSUNAMIS relate to earthquakes.
First, let’s get to know the word Tsunami : it’s a Japanese word, (from tsu “harbor” + nami “waves”) which means “harbour waves”. Although the term is used and understood around the world, please don’t let its definition fool you. As we have seen from the size and reach of the tsunamis that have struck our world in recent times, it is no longer a harbor wave. It is far reaching and thus, it is important to know more about its nature and learn how we can be better prepared for its coming.

ALL ABOUT TSUNAMIS
Info from National Geographic

What is a TSUNAMI?  A tsunami is a series of ocean waves that sends surges of water, sometimes reaching heights of over 100 feet (30.5 meters), onto land. These walls of water can cause widespread destruction when they crash ashore.

What causes a TSUNAMI? These awe-inspiring waves are typically caused by large, undersea earthquakes at tectonic plate boundaries. When the ocean floor at a plate boundary rises or falls suddenly it displaces the water above it and launches the rolling waves that will become a tsunami.

Where do most Tsunamis happen?  Most tsunamis, about 80 percent, happen within the Pacific Ocean’s “Ring of Fire,” a geologically active area where tectonic shifts make volcanoes and earthquakes common.

What else can trigger a TSUNAMI? Tsunamis may also be caused by underwater landslides or volcanic eruptions. They may even be launched, as they frequently were in Earth’s ancient past, by the impact of a large meteorite plunging into an ocean.

How fast do TSUNAMIS go? Tsunamis race across the sea at up to 500 miles (805 kilometers) an hour—about as fast as a jet airplane. At that pace they can cross the entire expanse of the Pacific Ocean in less than a day. And their long wavelengths mean they lose very little energy along the way.

Describe the appearance of TSUNAMIS.  In deep ocean, tsunami waves may appear only a foot or so high. But as they approach shoreline and enter shallower water they slow down and begin to grow in energy and height. The tops of the waves move faster than their bottoms do, which causes them to rise precipitously.

Describe the nature of TSUNAMIS. A tsunami’s trough, the low point beneath the wave’s crest, often reaches shore first. When it does, it produces a vacuum effect that sucks coastal water seaward and exposes harbor and sea floors. This retreating of sea water is an important warning sign of a tsunami, because the wave’s crest and its enormous volume of water typically hit shore five minutes or so later. Recognizing this phenomenon can save lives.

Is a TSUNAMI made up of only one wave?  No.  A tsunami is usually composed of a series of waves, called a wave train, so its destructive force may be compounded as successive waves reach shore. People experiencing a tsunami should remember that the danger may not have passed with the first wave and should await official word that it is safe to return to vulnerable locations.

Are TSUNAMIS always  large towering waves? No.  Some tsunamis do not appear on shore as massive breaking waves but instead resemble a quickly surging tide that inundates coastal areas.

What’s the best defense against a TSUNAMI? The best defense against any tsunami is early warning that allows people to seek higher ground. The Pacific Tsunami Warning System, a coalition of 26 nations headquartered in Hawaii, maintains a web of seismic equipment and water level gauges to identify tsunamis at sea. Similar systems are proposed to protect coastal areas worldwide.

———-
Why do some earthquakes cause tsunamis and others don’t?
Info from decodedscience

For an earthquake to cause a tsunami, certain conditions must be satisfied; 1) size, 2) depth of water, and 3)type of movement– must all be right to generate the huge waves.

Large earthquakes, however, do not always generate tsunamis – for example, an M8.6 off Sumatra in 2005 caused a 3m tsunami which killed over 1300 people, while another in the same region and of the same magnitude in 2012 generated no tsunami. Although both occurred in deep water (another necessary condition), they were characterised by different types of earth movement. The first involved sudden vertical movement over a long area of a fault: the second involved lateral (strike-slip) faulting within a tectonic plate.

In summary, then, it’s clear that not all earthquakes generate tsunamis. The International Tsunami Warning Center identifies the main causes of tsunamis as “large, shallow earthquakes with an epicentre or fault line near or on the ocean floor.” So a small earthquake, even if it fulfills all the other conditions, will not generate a major tsunami – and, in reality, such major disasters are mercifully few and far between. Read more…

Read about the 10 Most Destructive TSUNAMIS in History on Australian Geographic, List of Historic Tsunamis on Wikipedia, History’s Biggest Tsunamis on LiveScience

Here are a few educational videos to help you better understand TSUNAMIS.
Please choose the appropriate one for you (or your audience).

1. What is a Tsunami?  Educational video for Kids
by Mocomi Kids

2. How Tsunamis work – Educational video for Adults
by How Stuff Works

I have also attached a video of the 3.11.2011 TOHOKU Earthquake & Tsunami in Japan. It’s a 5-Part Feature, so if you wish to continue watching  please click the succeeding links.

TEACHER’s RESOURCES
Many countries and agencies  have developed their teaching/learning resources on the topic of earthquakes and TSUNAMIS. Here are some that I have gathered for you:
From  The Caribbean,  Emergency Management BC(Canada),  Australia, Discovery Education, Red Cross,  IRIS , USGS, NY Times… 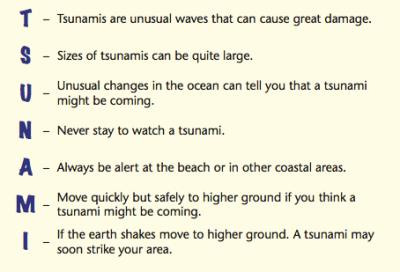 Here is an effective learning activity – get your students to write an ACROSTIC POEM about Tsunamis. Click here for ‘How to write an acrostic poem”,  Learning activity  from EMBC
Info for The Philippines:
TSUNAMI PRONE AREAS, Please browse list
Please read this: Developing a Tsunami-Prepared community

Art by Nick La
The Japanese symbol in the illustration means “home”. It symbolises the thousands of homes and families that were destroyed and washed away by the earthquake and tsunami  which happened in Japan on March 11, 2011. Learn more about  “To Japan with Love”
“Technological progress is fine,
but where we have not progressed
is in our understanding
that living together with nature
is the basis of human existence.
We’ve made a big sacrifice,
but I believe nature is telling us
to re-examine our lives.”
-Masaru Tanaka
Professor Emeritus at Kyoto University
(on the 3.11-2011 Tohoku Earthquake /Tsunami/Nuclear meltdown)
from interview with Dr. David Suzuki on Nature of Things
Quote Source

This entry was posted on October 30, 2013 by Paulina Constancia in Uncategorized.