Multi-faceted Artists 3: Actors Who Act with a Brush

Today we focus on actors who paint too. I bring you the art of Pierce Brosnan and Anthony Hopkins. I also provide you a link to other celebrities who fancy themselves as artists.

Image Source
Pierce Brosnan, the actor, was trained as a commercial artist and  has painted numerous landscapes as well as colorful portraits of his family. After Brosnan left school, he pursued a career in art and began working as an illustrator. “I always wanted to be an artist, a painter. I started as a Trainee Artist in a small studio in South London.” A colleague suggested that Pierce attend a theatre workshop, and eventually he abandoned his artwork to pursue a career in acting.
Brosnan took up painting again in the late 1980’s during his first wife’s illness as he found it therapeutic. “Sometimes dramatic moments affect the way you see yourself in the world…from a very hard time in my life, I started painting again and out came every color I could imagine.” Citing his influences as Picasso, Matisse, Bonnard and Kandinsky, Brosnan spends much of his free time between film shoots in front of his easel. “I am self taught, an enthusiastic painter as a friend of mine likes to say.”
Some of Brosnan’s works were designed as presents for his wife, Keely Shaye. The romantically titled Bisou Moi (Kiss Me) was given to Keely as a present on Valentine’s Day and features a nude woman standing next to yellow daffodils. Fiji, which was painted for Keely on Christmas of 1995, is a landscape view from the island of Wakaya.
Profits from the sale of the Giclee prints are given to the Brosnan Trust, which distributes money to environmental, children’s and women’s health charities. Info Source
See more of Pierce Brosnan’s Art
In addition to his stellar film and television career, Brosnan, together with his wife Keely Shaye, has been drawn into a passionate leadership role in environmental issues.Read more…
Anthony Hopkins
Actor-Writer-Director-Composer-Painter 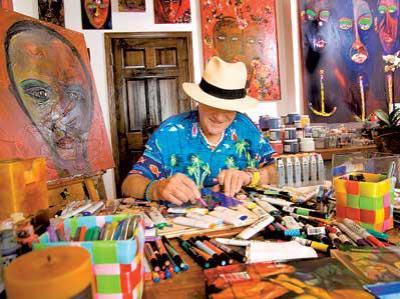 Anthony Hopkins demonstrates his new creative pursuit
at his home art studio …
Image Source
In recent years, the 72-year-old actor has become something of a renaissance man: in 2007 he wrote, directed and scripted a film called Slipstream. Last year, his composition The Masque of Time was given its world premiere by the Dallas Symphony Orchestra. Now there’s the painting.
Hopkins’s paintings are varied and variable – ranging from traditional landscapes to much darker and more garish images. Read more…

“When I paint, I just paint freely without anxiety regarding outside opinions as criticisms. I do it for sheer pleasure. It’s done wonders for my subconscious…I dream now in colours.”-Hopkins

Read this Interesting Article on The Frisky:
Macaulay Culkin & 11 Other Celebs
Who Fancy Themselves “Artists”

This entry was posted on January 23, 2013 by Paulina Constancia in Uncategorized.