Rhyme & Reason (6) – Make Your Interpretation of "The Owl & The Pussycat"

We continue with “Rhyme & Reason” with a special focus on Edward Lear’s nonsensical poem “The Owl and The Pussycat”. Lear was actually first and foremost an illustrator, writing silly rhymes was just something he did on the side. Read more on “Edward Lear: Two hundred years of nonsense” by Robin Banerji
on BBC World Service

Our Craft Challenge Today:
Make your own unique interpretation of “The Owl and The Pussycat”. It can be any form and size. Let your imagination fly, just as Edward Lear did.

But before you get started, I thought it would be nice to see how other artists have interpreted this great literary piece. If Edward Lear could see these creative interpretations, he would probably be quite amused. Sir Lear, thank you for showing us a world where pea boats float and bong-trees grow. This one’s for you!

The Owl and the Pussycat
BY EDWARD LEAR
I

Source: The Random House Book of Poetry for Children (1983)

The Story Behind
The Owl and The Pussycat
Info Source

“The Owl and the Pussycat” is a nonsense poem by Edward Lear, first published in 1871. Lear wrote the poem for a three-year-old girl, Janet Symonds, the daughter of Lear’s friend poet John Addington Symonds and his wife Catherine Symonds. The term runcible spoon was coined for the poem.
Some Print and Painting Interpretations of
The Owl and The Pussycat 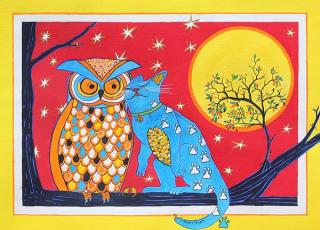 of The Owl and The Pussycat

Pewter bowl with a cat on the edge of the bowl
complete with an owl spoon
from  Glover & Smith
Inspired by The Owl and The Pussycat
by Edward Lear.
Image Source 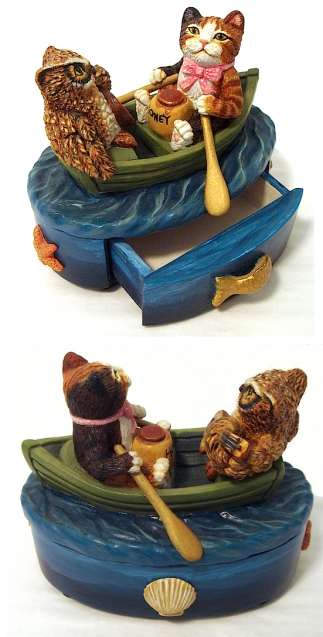 This exquisite treasure box is a One of a Kind original created by award winning world renowned artists Peter and Patricia Tyber.
It is intricately hand carved from Lindenwood and hand painted. The sweet little Owl holds a small guitar and gazes lovingly at Pussycat holding a jar full of honey. The sea box they sail upon has a hidden drawer to “hold plenty of money” and is embellished with fish, starfish and scallops. This unique sculpture will capture your heart and dreams that you can hand down from generation to generation.

Here is an animated interpretation
of The Owl and The Pussycat

This entry was posted on October 12, 2012 by Paulina Constancia in Uncategorized.