One of the joys of parenthood is reading and singing nursery rhymes. It makes you feel young again. If your day is not going so well and you see your child smile to that rhyme or tune, your mood changes and your troubles seem to just disappear.
This week I bring you “Rhyme & Reason”. I share with you the stories behind some of the most familiar nursery rhymes.
Today we look into the nursery rhyme,“Mary Had a Little Lamb”.
Mary had a little lamb,
whose fleece was white as snow.
And everywhere that Mary went,
the lamb was sure to go.
It followed her to school one day
which was against the rules.
It made the children laugh and play,
to see a lamb at school.
And so the teacher turned it out,
but still it lingered near,
And waited patiently about,
till Mary did appear.
“Why does the lamb love Mary so?”
the eager children cry.
“Why, Mary loves the lamb, you know.”
the teacher did reply.
The Story Behind
Mary Had A Little Lamb
Info Source
The nursery rhyme was first published (as opposed to written, which would imply they created it) by the Boston publishing firm Marsh, Capen & Lyon, as an original poem by Sarah Josepha Hale on May 24, 1830, and was inspired by an actual incident.
As a girl, Mary Sawyer (later Mrs. Mary Tyler) kept a pet lamb, which she took to school one day at the suggestion of her brother. A commotion naturally ensued. Mary recalled: “Visiting school that morning was a young man by the name of John Roulstone, a nephew of the Reverend Lemuel Capen, who was then settled in Sterling. It was the custom then for students to prepare for college with ministers, and for this purpose Mr. Roulstone was studying with his uncle. The young man was very much pleased with the incident of the lamb; and the next day he rode across the fields on horseback to the little old schoolhouse and handed me a slip of paper which had written upon it the three original stanzas of the poem…”
There are two competing theories on the origin of this poem. One holds that Roulstone wrote the first four lines and that the final twelve lines, more moralistic and much less childlike than the first, were composed by Sarah Josepha Hale; the other is that Hale was responsible for the entire poem.
Mary Sawyer’s house, located in Sterling, Massachusetts, was destroyed by arson on August 12, 2007. A statue representing Mary’s Little Lamb stands in the town center. The Redstone School, which was built in 1798, was purchased by Henry Ford and relocated to a churchyard on the property of Longfellow’s Wayside Inn in Sudbury, Massachusetts. 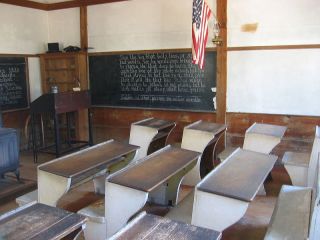 The Redstone School Classroom
Image Source
How did “Mary Had a Little Lamb”
become so famous?
Excerpt from  Now You Know Big Book of Answers
By Doug Lennox
“Mary Had a Little Lamb” was written in 1830 by Sarah Hale, the editor of Godey’s Ladies Magazine. She was inspired after watching young Mary Tyler’s pet lamb follow the girl to school, which of course, was against the rules.  The poem became immortal more than fifty years later when Thomas used it as the first words ever spoken and then recorded on his new invention, the phonograph.

Thomas Edison and His Invention- The Phonograph
Image Source
Listen to Thomas Edison’s  first recording on the phonograph:
MARY HAD A LITTLE LAMB
Read more about The PHONOGRAPH
Watch Mary Had a Little Lamb from Hoopla Kidz

This entry was posted on October 10, 2012 by Paulina Constancia in Uncategorized.