What The Slaves Ate

Welcome to another Food Day on Daily Dose of Art! After this week’s feature on SLAVERY: Then & Now, today I  bring you ‘What the Slaves Ate’.

Field slaves lived mostly on a diet of cornmeal, salt herring, and pork. They had two meals a day. There was breakfast at twelve and dinner much later. Solom Northrup, a slave from a Louisiana plantation said when describing his meals given to him by the planter: “All that is allowed them is corn and bacon which is given out in the corncrib and smoke-house every Sunday morning. Each one receives, as his weekly allowance, three and a half pounds of bacon, and corn enough to make a peck of a meal. That is all- no tea, coffee, sugar, and with the exception of a very scanty sprinkling now and then, no salt…..”
Francis Henderson from Washington D.C. also said something similar. ” Our allowance was given weekly- a peck of sifted cornmeal, a dozen and a half herrings, and two and a half pounds of pork. Some of the boys would eat this up in three days… I never sat down at a table to eat except for at harvest time, all the time I was a slave.”
Sometimes, when they were desperate for food the slaves stole animals at a high risk of being caught and punished. They were also allowed to keep small gardens called ‘truck patches’ to provide a little bit more food. Most slaves went hungry because of their small rations. Some planters allowed the slaves a gun to shoot their own food. They also fished. House slaves were given the leftovers from the big house meals.
At Christmas, slaves were sometimes given a couple days to a week off. Some plantations provided extra rations. Some were even lucky enough to receive small valuables or amounts of money.

To Learn More About African American Slave Foods here is a book you can consult: 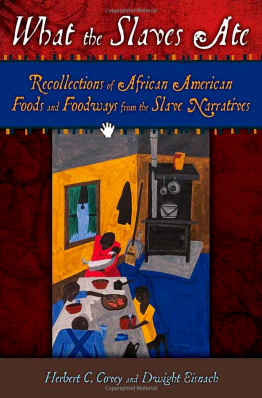 What the Slaves Ate: Recollections of African American Foods and Foodways from the Slave Narratives
Authors:Herbert C. Covey and Dwight Eisnach
Book Description

Carefully documenting African American slave foods, this book reveals that slaves actively developed their own foodways-their customs involving family and food. The authors connect African foods and food preparation to the development during slavery of Southern cuisines having African influences, including Cajun, Creole, and what later became known as soul food, drawing on the recollections of ex-slaves recorded by Works Progress Administration interviewers. Valuable for its fascinating look into the very core of slave life, this book makes a unique contribution to our knowledge of slave culture and of the complex power relations encoded in both owners’ manipulation of food as a method of slave control and slaves’ efforts to evade and undermine that control.
While a number of scholars have discussed slaves and their foods, slave foodways remains a relatively unexplored topic. The authors’ findings also augment existing knowledge about slave nutrition while documenting new information about slave diets.

This book is available through AMAZON

Here are some dishes with African influences that were developed during Slavery in America:

GUMBO
an example of Cajun cuisine
Image & Info Source
High on the list of favorites of Cajun cooking are the soups called gumbos. Contrary to non-Cajun, or Continental, beliefs, gumbo does not mean simply “everything in the pot”. Gumbo exemplifies the influence of African and Native American food cultures on Cajun cuisine. The word GUMBO originally meant okra, which is a word brought to the region from western Africa. Okra, which can be one of the principal ingredient gumbo recipes, is used as a thickening agent and for its distinct vegetable flavor.

HUSH PUPPY
an example of “Soul Food”
Image& Info Source
A hushpuppy (or cornbread ball) is a savory, starch-based food made from cornmeal batter that is deep fried or baked in small ball or sphere shapes, or occasionally oblong shapes. Hushpuppies are frequently served as a side dish,usually at fish restaurants.

This entry was posted on August 25, 2012 by Paulina Constancia in Uncategorized.