Welcome to another Food Day on Daily Dose of Art! And Happy International Tiger’s Day (July 29th)!
I had a difficult time deciding what to feature today to close the Tiger Talk week.  Everybody’s probably eaten or seen Tiger Cake or Tiger Bread, and of course there’s Tony the Tiger’s Frosted Flakes (by Kellogg’s).  Then I came across an interesting fact about the “Tiger Lily” and I thought this might be a more curious edible Tiger to feature. You can actually eat its buds, and apparently it tastes just like potatoes…read on!
How to Cook TIGER LILY BUDS
from Livestrong

The buds of yellow and orange lilies you may find along ditches and other wild areas can also be found in Asian markets. The roots and shoots of the tiger lily are also edible. Their bitter taste changes into something similar to potatoes once they are soaked and cooked properly. In China, the buds are often referred to as golden needles, and they are used in many traditional dishes. The are especially common in dishes around the Chinese New Year.

Step 1
Fill your bowl with warm water, and place your tiger lily buds in the water. Set them aside to soak for half an hour.
Step 2
Cut off the stem on each bud. Slice each bud into bite-sized pieces.
Step 3
Add your tiger lily buds to soup recipes about four minutes before the soup is ready to be served. Toss the buds into stir fry recipes once the rest of the vegetables are almost cooked. Stir and cook the buds for about three to four minutes. 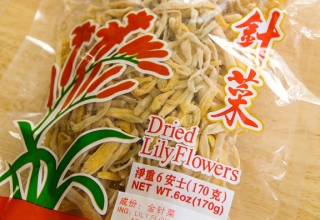 Also known as golden needles and tiger lilies, dried lily buds are the unopened flowers of day lilies.  The lily, Hemerocallis to use its scientific name, has been used in China as both a food and medicine for over 2,000 years. Dried lily buds are yellow-gold in color, with a musky or earthy taste. Two dishes featuring lily buds are Muxi Pork, a stir-fried dish, and Hot and Sour Soup
Info and Image Source

For those of you who don’t have the time to prepare the lily buds but have the curiosity to try out a Tiger Lily dish,
this might be the easier way to do it–
buy an instant Knorr Tiger Lily & Mushroom Soup Mix
Image Source

Buddha’s Delight
A special dish to help get your Yin/Yang in better balance. Especially popular during the Chinese New Year. Requires 1/3 cup dried tiger lily bulbs or “golden needles” as the Chinese call them.
Check out this recipe

Some Tiger Day Activities:
Learn more about tigers and help WWF and Leonardo DiCaprio save tigers in the wild
Share the Legend of How Tiger Got Its Stripes with the young ones in your family (A Vietnamese folktale about humility and wisdom retold by StoryCove)
How about making a Tiger Gift Bag?
If you don’t feel like making Tiger Lily Soup maybe you can try making some “Tiikerikkakku”, (tiger cake in Finnish)

This entry was posted on July 29, 2012 by Paulina Constancia in Uncategorized.