July 29 is International Tiger Day. This week is a great opportunity to talk about tigers. Today I feature the symbolism of The Tiger in Chinese Culture.

“The Tiger”
at the Dragon and Tiger Pagodas
Kaohsiung, Taiwan
Image Source
The Tiger in Chinese Culture
Info Source

Throughout Chinese history, the tiger has incited a sense of both awe and admiration: its prowess, its ferocity, its beauty, and the harmony of the opposites. The tiger is full of life and embodies the spirit and drive to achieve and make progress.

The tiger has been common in the southern provinces of China, and in Manchuria in northeast China, and revered by the Chinese as a creature with many symbolic attributes. Each direction of the compass is traditionally believed to be ruled by a mythical creature; the White Tiger is the ruler of the West. The tiger is also associated with autumn, when it comes down from the mountains into villages, and is personified by the constellation Orion, which is prominent in autumn. In Chinese astrology, the start Alpha of the Great Bear constellation gave birth to the first tiger. The tiger represents the masculine principle in nature and is king of all the animals, as shown by the four stripes on his forehead, which form the character Wang, or Prince. The tiger is regarded as one of the four super-intelligent creatures, along with the dragon, phoenix and tortoise; for centuries, the four have been a major design motif in Chinese art.
In southern China, on the tiger’s birthday, on the second moon in the lunar calendar, fixed in the Western calendar as March 6, women worship the White Tiger. They place paper images of the tiger in their homes to keep away rats and snakes and prevent quarrels. On this date, effigies of the tiger are also put in front of temple buildings for people to make offerings. The God of Wealth, the deified Marshal Chao Gongming (Chao Kungming), is depicted riding a black tiger and holding a silver ingot. The Chinese call an able general a “tiger general” and a brave soldier, a “tiger warrior”.
In Chinese folk tales, tigers kill evil men and protect good men. Tiger charms are used to keep away disease and evil, and babies are given colourfully embroidered tiger shoes for protection. Tiger images frequently decorate children’s clothing and tops. The “Tiger Claw” (hu chao) amulet is believed to ward off sudden fright and give the wearer the courage of the tiger. Because the tiger wards off disasters, it is popular as one of the nine gods worshipped at the New Year Festival. Tiger images are painted on the walls of homes and temples to keep away evil spirits. Dragon-Tiger Mountain is the name for the palace of the hereditary head of the Daoist religion, located in the Dragon Tiger Mountains of Jiangxi Province, east of the capital city of Nanchang. Zhang Daoling (Chang Tao-ling), the “First Master of Heaven” in the Daoist religion, is depicted riding a tiger and carrying a demon-dispelling sword as he escorts the dead to their final destination. A Daoist legend tells of two brothers who took on the role of protecting human beings by capturing demons and throwing them to tigers.
As the enemies of evil spirits, especially those who torment the dead, tigers are carved on tombs and monuments. The Chinese system of feng shui (geomancy) requires that a burial site be higher on the right side, the stronger side of the body, so that the White Tiger can guard it; the Azure Dragon guards the left side, the body’s weaker side. The tiger is the third animal in the 12-year animal zodiac. People born in the Year of the Tiger are thought to be brave, strong, stubborn and sympathetic. The tiger represents the greatest earthly power, as well as protection over human life. It chases away the so-called “three disasters”: fire, thieves and ghosts.
The tiger is historically a Chinese cultural symbol. It has inspired imagination, stories, paintings, and poetry with the tiger: the earliest tiger statue was found in the Neolithic period in China 7000 years ago; the Year of the Tiger, tiger shoes or hats; the Tiger seal, Tiger Tally and Tiger General. There are also idioms and poetic renderings such as: Tiger roaring & dragon singing-the world is peaceful; Mountain and Valley replying- the people are wealthy and the country strong. 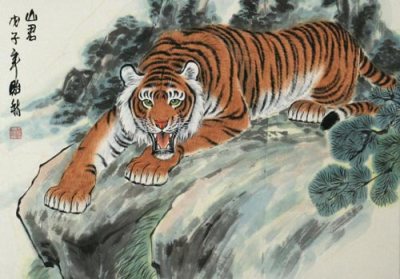 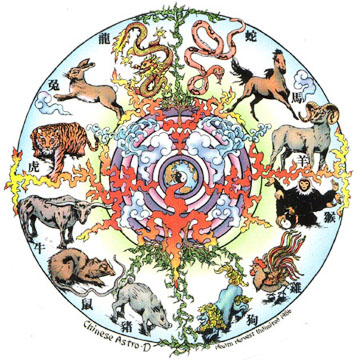 TIGER in Chinese Zodiac
The Tiger is the third animal in the Chinese Zodiac cycle (a 12-year cycle of animals)
1926, 1938, 1950, 1962, 1974, 1986, 1998
“Born leader” is the key word for the Tigers. They are always in the lead and are most likely the ones to cry out “Let’s Go”! Noble and Fearless, Tigers are respected for their courage, even from those working against them.
Tiger people are daring fighters, they are capable of standing up to the better end for what they think is right. Although they could be selfish from time to time in the little things, they are capable of great generosity. Tigers are unpredictable, always tense. and like to be in a hurry.
Tiger people are difficult to resist, for they are magnetic characters and their natural air of authority confers a certain prestige on them. They are tempestuous yet calm, warm-hearted yet fearsome, courageous in the face of danger yet yielding and soft in mysterious, unexpected places.
Tigers are very confident, perhaps too confident sometimes. Although they love adventures, and are addicted to excitement it is better not to challenge a Tiger’s confidence. They likes being obeyed and not the other way around.(Read more)

This entry was posted on July 24, 2012 by Paulina Constancia in Uncategorized.