Passion Plays Around the World

When I think of Passion plays two things come to mind: my personal experience of the Canadian Badlands Passion Play in Drumheller and my Mom’s pilgrimage trip to witness the Oberammergau Passion Play.

Watch the official trailer of the
2010 Oberammergau Passion Play


Imagine a small Bavarian village nestling in the shadows of the Alps in 1633. The Great Plague descended and many lives were lost to this mysterious illness. The town vowed that if God were to spare them from the effects of the bubonic plague ravaging the region, they would perform a play every ten years depicting the life and death of Jesus.
The death rate among adults rose from one in October 1632 to twenty in the month of March 1633. The adult death rate slowly subsided to one in the month of July 1633. The villagers believed they were spared after they kept their part of the vow when the play was first performed in 1634. Performances took place in 2000, and the most recent season of 102 performances took place from Saturday 15 May until Sunday 3 October 2010.

The play, now performed repeatedly over the course of five months during every year ending in zero (next in 2020), involves over 2,000 performers, musicians, and stage technicians, all residents of the village. The play comprises spoken dramatic text, musical and choral accompaniment and tableaux vivants, which are scenes from the Old Testament depicted for the audience by motionless actors accompanied by verbal description. These scenes are the basis for the typology, the interrelationship between the Old and New Testaments, of the play. They include a scene of King Ahasuerus rejecting Vashti in favor of Esther, the brothers selling Joseph into slavery in Egypt, and Moses raising up the nehushtan (bronze serpent) in the wilderness. Each scene precedes that section of the play that is considered to be prefigured by the scene. The three tableaux mentioned are presented to the audience as prefiguring Christianity superseding Judaism, Judas selling information on the location of Jesus, and the crucifixion.

It can be said that the evolution of the Passion Play was about the same as that of the Easter Play, originating in the ritual of the Latin Church, which prescribes, among other things, that the Gospel on Good Friday should be sung in parts divided among various persons. 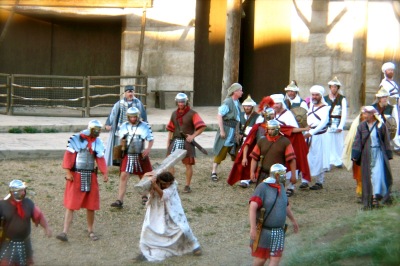 This entry was posted on April 6, 2012 by Paulina Constancia in Uncategorized.